by Susan Myers on September 3, 2010
in cooking, hand-dyeing, knitting
Everyone who knows me knows that I’m not the best in the kitchen.  I get by, but I just have this short attention span when it comes to cooking.  I can sit for days patiently glueing thousands of beads to a crafty project, but tell me to stand in the kitchen and watch something boil and my eyes cross with boredom in no time.  So I tend to “multi-task” when I cook, which often gets me in a bit of trouble.
The other day I got the brilliant idea to make a pumpkin pie. So, I threw the pie in the oven with the best of intentions. How was I to know that I would get distracted by something else in the other room? ANYWAY, about 2 hours later I realize that the entire house is smelling rather pumpkinny. How nice! …Oh wait! Not wanting to unduly alarm anyone, I backed nonchalantly out of the living room and acted like I was just getting a drink or something. No sense in getting the hubby all worked up. Seeing no smoke in the kitchen, I had a moment of relief. Maybe I didn’t screw it up after all? I opened the oven door and was greeted with a rather charcoal looking pumpkin pie. Umm… guessing it shouldn’t be black on top? So I quickly took the pie out of the oven, looked over my shoulder and started scraping the black off the top. About a half inch down, I got to pumpkin color again. I know! I’ll scrape off the black, top it with whipped cream and no-one will know the difference! About that time, both my daughters walked into the room. I knew that because of the loud guffawing. And of course they had to go get their dad and show him.

There are many other examples that I won’t get into…. 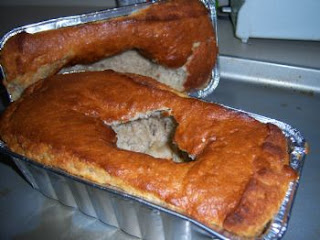 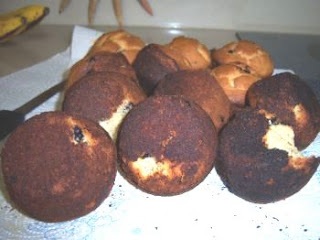 So let’s just say when the family found out that I planned on using the kitchen to hand-dye some yarn, they were a bit apprehensive.  But in this case, I’m mixing crafty stuff and cooking, so where could we go wrong?

One of my current obsessions is knitting socks.  I’m working on the following right now: 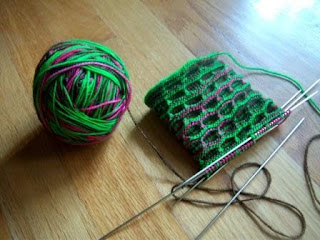 A variation of Circle Socks by Anne Campbell.  I am using Superwash Merino in the colorway “Spumoni” by The Grinning Gargoyle. 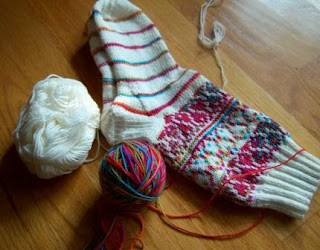 A variation of Fish Market by Andrea Krüß-Anders in Red Heart- Heart and Sole White and ShiBui Sock Superwash Merino in the colorway Spectrum.
Notice that I tend to lean toward the hand-dyed varigated yarn.  So naturally, it would lead to me wanting to try my hand at hand-dyeing my own.  I had read that it could be done rather easily using Kool-Aid, food coloring or egg dye. Since I had snapped up a bunch of egg dye after easter at 90% off; egg dye it would be. 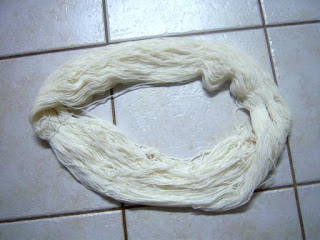 Animal fiber is apparently what you need to use when dyeing with natural ingredients.  If you want to dye anything that is plant fiber such as cotton, you would need to use a much stronger acid dye. I purchased some Bare Superwash Merino Wool from KnitPicks.  It came in a loop tied in two places.  You have many options here.  You could undo the strings and wrap the yarn into a longer loop.  This would create longer areas of each color.  Or you could do what I did and keep it this way.  In either case, be sure to tie it in several more places to keep it from knotting when you work with it.  It is suggested that you use an acrylic yarn for tying as the acrylic will not take the color. 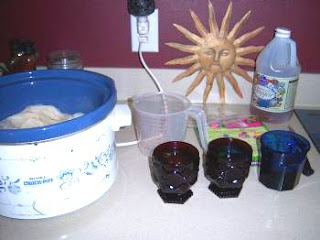 First, I soaked the yarn in a vinegar/water solution (1 cup vinegar to 2 gallons water) in my sink for about an hour. I weighted it down with a plate to keep the yarn submerged.  Vinegar is used because an acid is needed to bind the color to the yarn.  If you were using Kool Aid, the vinegar would not be necessary as Kool Aid has an acid base.  At this point,  I made up the colors that I wanted. My idea was to go with spring colors. Maybe bright yellow, green and blue. I used two tablets of each color and made them up with vinegar per the directions on the box.

After the yarn was fully saturated, I moved it to my crock pot.  Yep, you can use your kitchen utensils on this project.  Unlike acid dyes, these dyes are safe to work with in your kitchen. 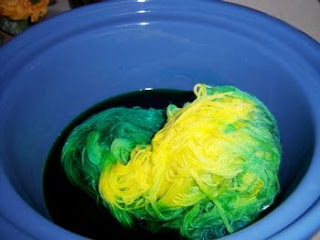 I added the colors to sections of yarn in the crock pot, being careful to keep the yellow from sinking into the rest of the dye.  I wanted bright yellow, fading to green, fading to a deep blue.  Do not stir.  Put the cover on the crock pot and set the crockpot on high.  Allow the yarn to steam for about an hour. 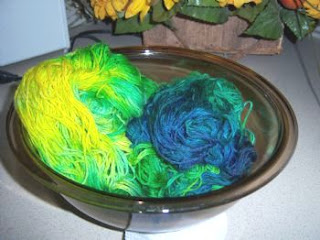 You know when it is done when the yarn soaks up all the color and the water is clear.   You won’t believe it, but it will be clear.  Amazing.  Carefully lift your yarn out with tongs and allow it to cool.  Because it is wool, it can felt and we don’t want that.  So don’t mess with it too much until it has cooled.  Once it has cooled, rinse in luke warm water (the same temp as the yarn) and then place between two thirsty towels and press out as much of the water as you can. 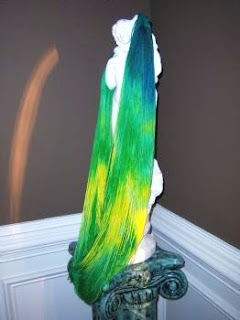 Here I have it drying on my make-shift yarn dryer rack. Ol’ Venus finally came in handy. All this time, she’s been hanging out in my dining room, showing off her nakedness and sponging off of me. Finally, she earns her keep. And if you ask me, she looks pretty darn good in my yarn. Work it, girl. 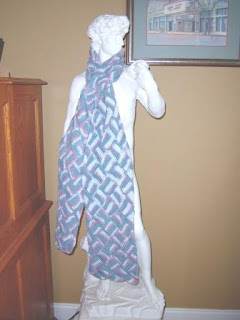 My David statue was jealous, so I let him wear one of my hand knit scarves. 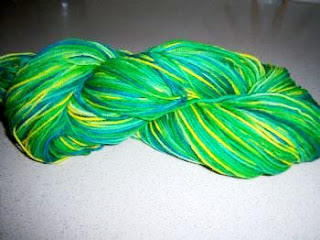 The final product. A little more on the green side than I wanted, but an awesome first attempt. I can’t wait to see how it knits up.

Another option would be to string your original yarn in a long loop.  After soaking in vinegar and water, lay it out on a table covered in trash bags.  Apply your egg dye with a turkey baster.  Once it is dyed how you like it, add it to the crockpot and steam as above.

This is a nice safe project for the kiddos too.  Remember, Kool Aid or food coloring can be used.  The possibilities are endless.  And best of all, I was finally productive in the kitchen.  Imagine that.

If you enjoyed this tutorial, you might like my Chocolate Box Pincushion tutorial.  Make a fancy box of “chocolates” out of fabric and ribbon.

Never miss a post… subscribe to my site by email! See the easy link on the right side of the page. 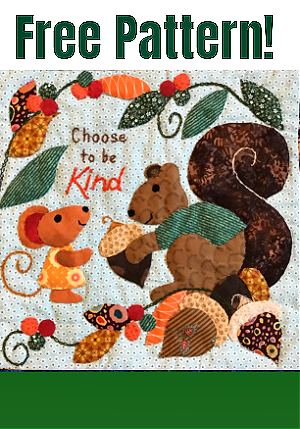