When we moved into our house eight years ago, every wall was white. It was a total blank canvas. It was exciting, but a bit intimidating too.  What would we do with all that white space?  With the help of textured wallpaper and wood trim, and a bunch of paint, we transformed a blank canvas into beautiful entranceway! This DIY project may take a bit of time, but is relatively simple to do. 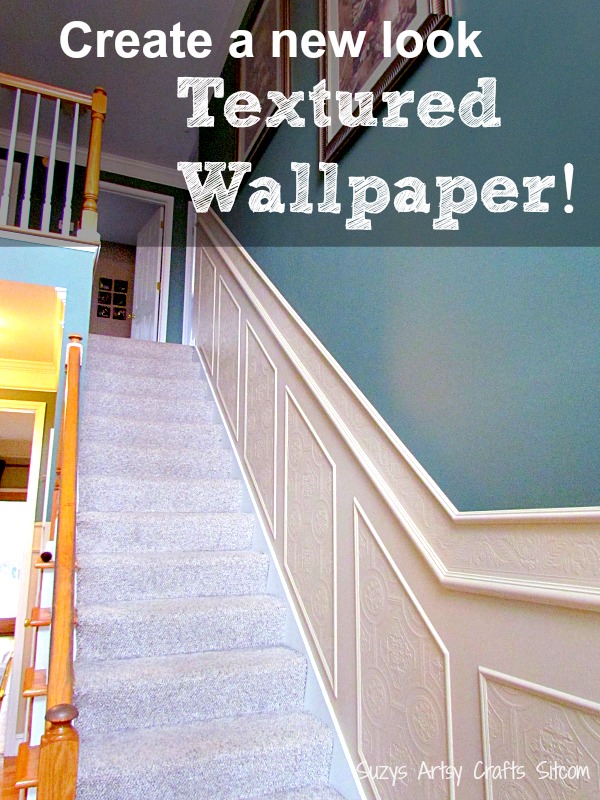 We first tackled the huge of expanse of white wall that went two stories up and included the stairwell to the second floor. The question was how?  And then it came to me to create faux carving from paintable textured wallpaper. 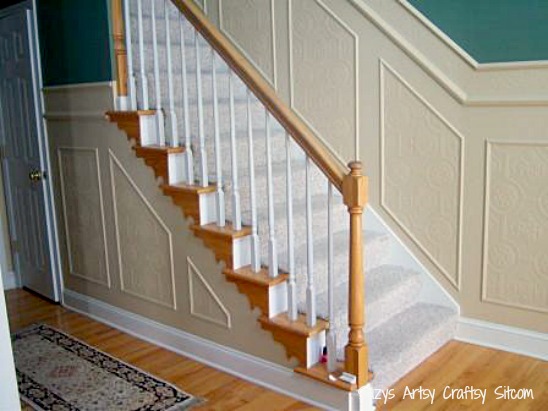 After being in the house a few years, the wall along the stairs began to look dingy. My daughter’s bedroom was up there and keeping her and her friends from man-handling the wall on the way up was a total losing battle. What to do to break up all this whiteness and handprinted-ness?

The stairwell in my old house had to be painted repeatedly, but it was only a 5 step stairwell and the walls were easily reached. Which was a good thing in fact because I am a total clutz and managed to fall down the stairs on my butt one night with an open bottle of cough syrup in my hand. I ended up splattering red cough syrup on the wall, the whole way down the steps. I’m here to tell you that if that should ever happen to you, just paint the wall. It won’t come off. I promise. 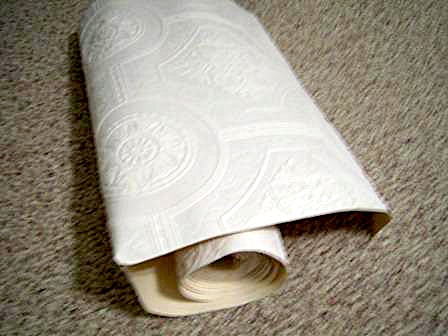 But this stairwell is much different. We knew that when we finally made a decision, it would have to be a pretty permanent one. We didn’t want to have to do it over again. So one day, we ran across some paintable textured wallpaper and we came up with an idea that worked for us.

For this project we used:

Once everything was marked to our satisfaction, we began cutting the trim with a miter saw. My husband was in charge of this part as he is very good with wood. He added a touch of wood glue to the back of the trim, and then used finishing nails to hammer into the wall. He used wood putty to smooth out any imperfections where the corner pieces met and to cover any nail holes. Once the putty dried, he sanded it down and it was ready for paint. 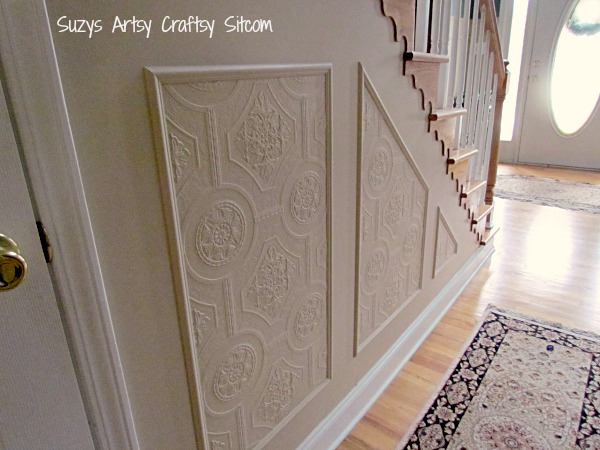 Now for the fun part. Using wallpaper glue and water, we cut sections of the wallpaper to fit into the panels. We found that we needed the additional help of wallpaper glue to get a good stick. We did not want to have to deal with peeling wallpaper later down the road. We did the same with the wallpaper border, fitting it in between to two pieces of trimwork that marked the top of the chair rail. 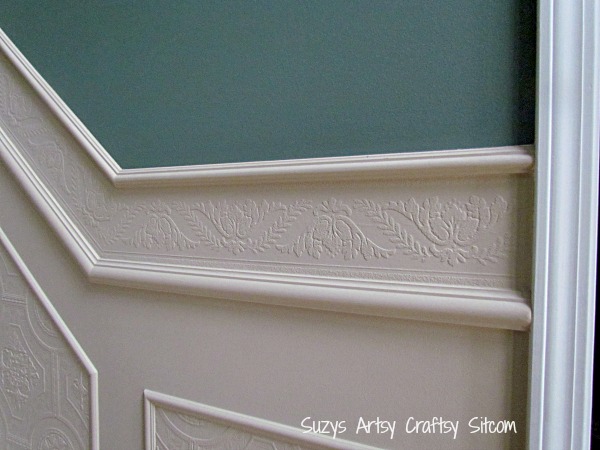 We put in two sections of trim at the top of the chair rail, just far enough apart to put the wallpaper border in between. 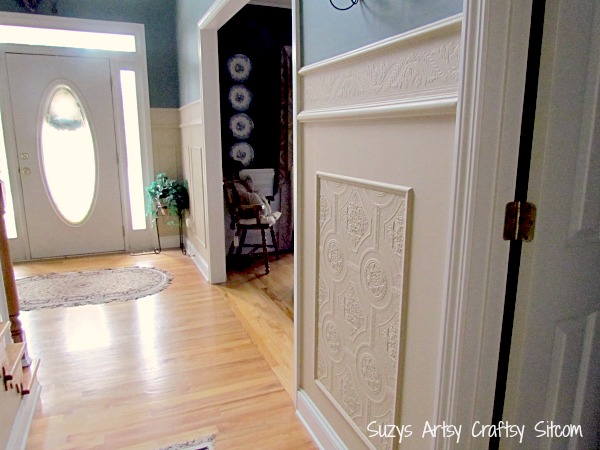 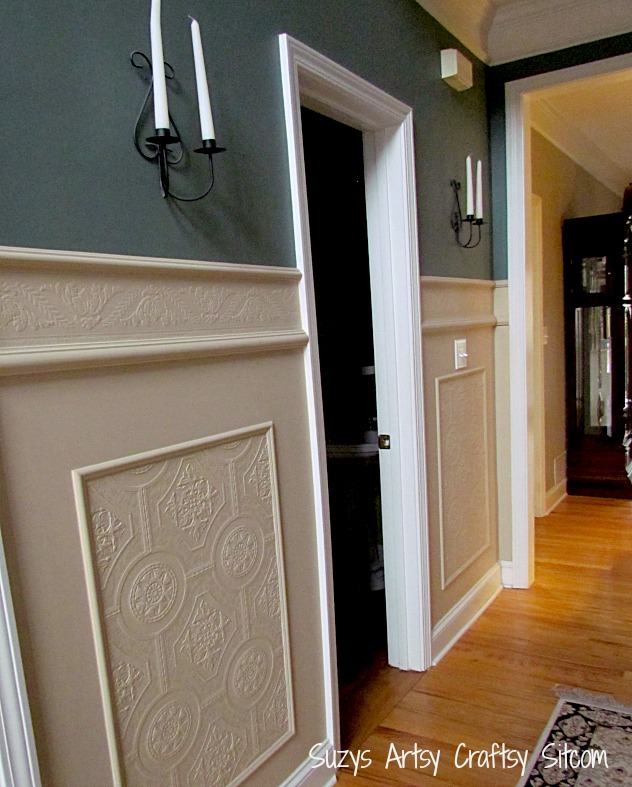 Then after much trial and error, we chose two contrasting colors for our entrance way. We painted the chair rail and “wainscoting” a cream color and from the chair rail up, a dark fern green. I particular love how the use of one color on the trim and the textured wallpaper gives the wall a “carved wood” look. In fact, we have been asked several times if it is carved. 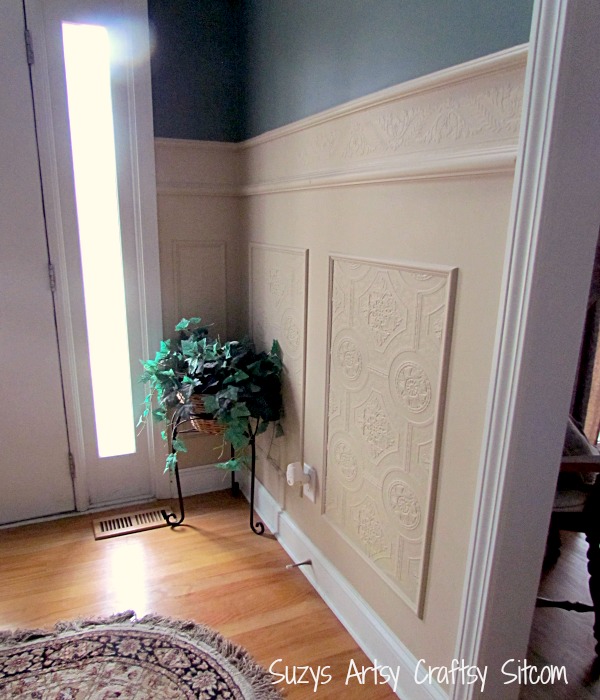 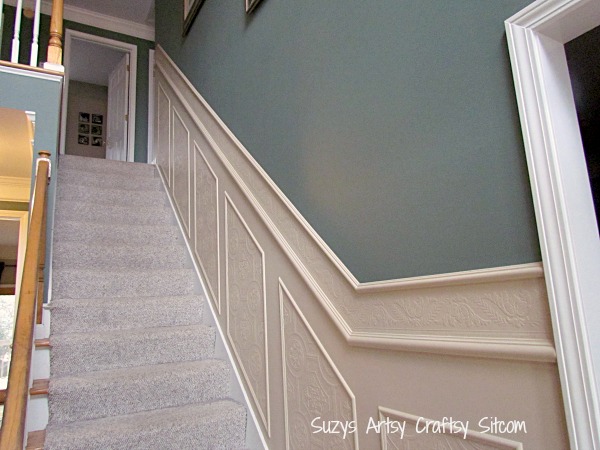 The two contrasting colors and the high chair rail with wainscoting broke up the vast expanse of the hallway and gave the entranceway and stairwell a ton of well needed character.

If you enjoyed this post, you might like my Faux Textured Chair Rail Tutorial.  A low budget option for creating a chair rail out of paint and sheet rock putty.

Also, if you are into the faux painting thing, check out my Faux Marble Ceiling Tutorial.  All you need is a little paint and a tons of imagination…

For over 150 more tutorials for all ages, be sure to visit my Tutorial Page!