For my ornament club this year, I’ve decided to go with a paper mache item.  I can’t get more detailed here as several of my club members read my blogs, but suffice it to say that naturally, I chose something that takes forever to do.  My husband says I’m a glutton for punishment.  Well, with putting together several tutorials last week and trying my best to keep up with making ornaments for the club, I got a little behind on my blog posts.  No problem!  I said to myself.  I will catch up this weekend!

Ha!  The fates have collided, obviously with the sole intent of messing with my plans.  Paranoid?  Naturally.  You see, someone decided to run over the transformer that houses the phone and internet lines to my neighborhood, sending us all back into the old days when we did not have direct access to the world from our livingrooms. And the neighborhood was silenced… 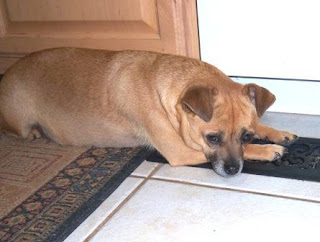 See, even Faith is depressed….

So unfortunately, Monday Etsy Madness will have to be delayed until Tuesday.  In the meantime, I will entertain you with a post that I wrote about a year ago. It’s an oldy, but a goody.  Kinda like me.  Ha!

My husband and I are creatures of habit. We have our established routines. We are both a bit anti-social and keep to ourselves most of the time. We both have odd hobbies in common such as looking at houses even when we aren’t buying, and people watching. They say there is someone for everyone and oddly enough, he likes doing the same things that I do. Who’d have thought it?

Friday night is our night to go eat at our favorite little Italian restaurant. We have been eating there every Friday night for years now. I used to always order two slices of pizza with pepperoni, veggies and anchovies. In the south, anchovies are not a popular item for pizza. In fact, a lot of restaurants don’t even carry them. I guess it is like going up north and ordering grits or sweet tea. You get that brief look of disgust before they can properly conceal it. They used to refer to me as the “anchovy lady”. I was told that they only had one other customer who orders them. An older gentleman. I’m willing to bet it was my dad.

After dinner, we go to the mall for some Starbucks coffee and some people watching. People watching is an art that my husband and I have perfected over the years. We have practiced the skill of watching but not appearing to stare, of commenting to each other with glances and nudges. People watching is like bird watching; there are so many different colors, shapes, sizes of folks. So many interesting choices of plumage. So many things to catch the eye.

The entertainment abounds at the mall. There are the women and teenage girls that insist on dressing up to shop. Well, maybe not shop so much as to be seen shopping. Let’s call them the Tasmanian Red-tailed Hoochie-shoe. This species likes to wear short, tight skirts or jeans and heels that are so high that one wobble one way or the other could result in imminent death or in the very least, a nose bleed. They can be seen perusing the purses in the center aisle of the mall or flittering about the food court. Showing their plumage to the best of their ability while pretending to be interested in the latest fashion trend in wallets.

They are in truth, keeping their eye out for the Blue-crowned Bling-breasted Cool Dudes. These are the young guys with the droopy pants and the eye catching undies hanging out the back. There to impress, they swoop in and out of the mall, trying to look uninterested. Of course we are impressed. Who wouldn’t be? 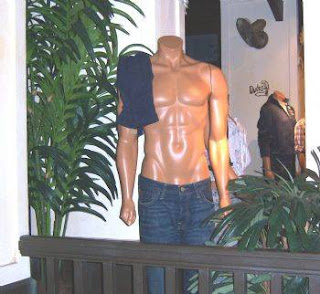 A storefront mannequin of the Blue-Crowned Bling-Breasted Cool Dude. This one is sans undies and frankly has all his “Ken parts” showing. I was a bit appalled.

The moms with the Hummer-like strollers are quite common in the mall even on a Friday night. These would be the Chestnut-winged Chariot-Pushers. They usually arrive in flocks of three or more and shop together with their children in tow, some entrapped in the swiss-army knife of a baby carriage and some led around with child-leashes behind them.

The carriage alone is a sight to behold. The size of a volkswagen, they have compartments for everything and hold much more than the child. Drinks, snacks, purses, packages, small tv’s, satellite dishes, jacuzzis. Who knows what all is in there? I’m not even sure how they find their child amongst everything. The common Chestnut-winged chariot-pusher is not necessarily here to be seen, so much as to be heard. You can hear their call for miles. “No! Don’t touch!” “Don’t touch!”

Finally, there are the Yellow-crested Standing Peacops. These are the unfortunate species meant to help supervise the wild creatures that descend upon the mall. These are the mall cops. We watch them with amusement because their main job on Friday nights is to check IDs. You see, no-one under the age of 18 is allowed in our mall unescorted by a parent after 6:00 PM. Apparently, there was trouble and the teenagers were evicted. This really and truly cut down on the variety of people watching offered by the mall, but in place, gave us something to watch as the new rules are constantly being enforced and re-enforced.

Last Friday, after several hours of people watching, my husband and I were about to leave when I decided to gently harass the mall cop positioned at the top of the escalator. I smiled pleasantly at him and told him that I understood why he hadn’t asked for my ID. I pointed to my husband and said, “You must have assumed he was my father.” He laughed and told me that he would have asked, but I looked like I was properly escorted. I think the Yellow-crested Standing Peacop is now my favorite of them all. Flattery will get you everywhere.