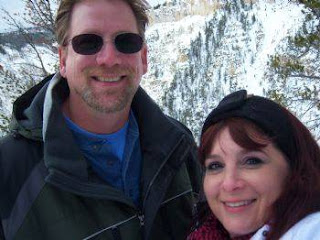 My husband and I went on a vacation to Montana a year ago. This year, it isn’t going to work out, but that doesn’t stop me from checking out the webcams in West Yellowstone and wishing I was there.  We love the snow. Our idea of a great vacation involves minus zero weather, snowmobiles, boots and skis. I definitely do not fall in the “athlete” category, so most folks are very surprised when they find out that we do such active vacations.

I learned to love snowmobiling and skiing after I met my husband. And West Yellowstone is a great place to snowmobile. Miles and miles of trails and tons of deep snow. And animals. And temperatures so cold, you have to be careful to breathe through your nose so as not to freeze your lungs. And when you get out there and look up into the night sky and see the millions of stars that you never can see under Atlanta skies, well that bit of cold weather just doesn’t seem to bother you in the slightest anymore.
So I’m proud to say that last year I was the honored recipient of not one, but TWO sports injuries! Yes, me! The total couch potato, food-aholic, crap TV watcher, bump-on-a-log that I am- I managed to not only spend my vacation doing several different sports, but came back with a sports injury from each sport to prove it! I am somebody now. Ha! 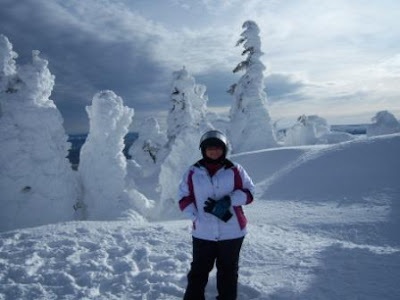 Sports Injury #1– My version:
I’m making my way down the mountain, swishing this way and that, enjoying the crisp cold air. I come to a fork in the trail. My options are to keep going down the green slope or to make an attempt at a difficult Double Diamond trail. Now I do like challenges, so I opted for the Double Diamond which consisted of a good section of moguls and quite a bit of steep rocky terrain. Nothing that I couldn’t handle.
I got up to a good speed of about 50 miles per hour, shot over several ramps, and was flying past several teenage snowboarders, when I came across a bear who had wandered onto the trail. He had apparently temporarily woken up from his hibernation and was looking for a little midnight snack to tide him away for a couple more months (not unlike me and my sleepy eyed rummaging through the frig at 2:00 AM). I had to make a quick adjustment to avoid him and tripped over the edge of his nightshirt and it send me sprawling in the snow, resulting in a slightly twisted left knee.
My husband’s version:
Yeah. I couldn’t get her to do anything but the Bunny trails. I get to the bottom and wait for her as she picks her way slowly down the mountain, one snowflake at a time. She finally gets all the way to the bottom, gives me a thumbs up and promptly falls on her ass. What an embarrassment. I pretended she was waving at someone else. It took her fifteen minutes to untangle herself from her skis. How you can go from no miles an hour to a twisted knee, I have no idea. 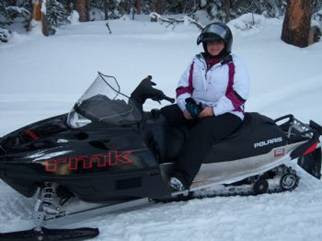 Sports Injury # 2– My version:
I’m speeding over the trails on my snowmobile, taking the turns on one track, throwing snow in all directions. I am following my husband and apparently following him a bit too closely, because I am suddenly put in a predicament when he stops to look over his map.
I slam on the breaks in order to avoid him and due to the fact that we were on snow, the front of my snowmobile stopped, while the back of it just kept going, resulting in what one might consider sideways movement and possible rolling. In slowwww motion I realize that I have to make a decision. I can stay on the snowmobile and possibly roll with it or I can jump off and take my chances in the snow. So naturally, I jumped. The snowmobile righted itself at the last minute and drove past him riderless, stopping a short distance up the road in a snowbank.
I landed in a heap on the snowy trail. I look up and my husband (the one that swore to love, honor and cherish me) was still reading his map, oblivious to the fact that not only had my life just flashed before my eyes, but he had nearly lost his short order cook and bottle washer to a “snow incident”. Finally, he glanced up from the map of interest and gave a puzzled look at my riderless snowmobile and turned around to see me walking up the road. “What the heck are you trying to do?” he yells, as if I was some teenager doing wheelies on his brand new motorcycle. Oh, just wanted to see the snow first-hand, you know in an up-close personal kind of way. Ha! This resulted in my second sports injury, a large bruise on my right knee.
His version:
OMG. It’s a “spaz injury” not a sports injury.
Yeah, maybe, but only athletes get sports injuries. Just sayin’.

Previous post: How to make Faux Stained Glass with Acrylic Paint and Glue