Embarrassed is my middle name… 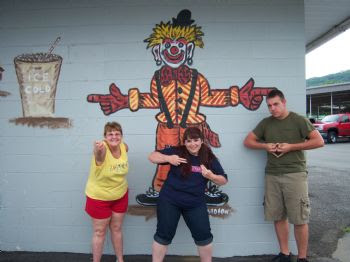 Hanging out with the Clown Gang…

So, my daughter and I were talking recently about our most embarrassing moments.  I have so many to choose from, it was difficult to come up with one in particular.  But after some thought, it did occur to me that there is one particular time several years ago that most certainly would fit the bill.  So here goes…

One Sunday morning I was doing my daily negotiation session with the scale. The scale and I have an agreement, I stay away from salt and drink gallons of water and in return, it gives me a half-way decent number. Some days the scale does not hold up it’s end of the bargain, some days, I don’t. My husband worked on Sundays at the time, so I had that time on those mornings to do the extra things, like my weekly facial and of course the scale negotiation session.

I had just come to agreement with my buddy the scale, when I heard the dogs start to bark. It was early, about 7:30 AM, so I was not expecting company. I peeked out the blinds and didn’t see anyone. I decide that the dogs were just barking at a squirrel again. The squirrels have a tendency to hang out by the back windows and drive the dogs insane. We have several fat ones that like to have little parties on my back porch. They pick my tomatoes when they are still green, take one bite out of them and leave them in neat little rows on the porch railing. Both the dogs and I are not their biggest fans.

I threw on my underwear and walked through the house and let the dogs out the back door. The dogs were instantly appeased and I started to head back to the bedroom. Distantly, I heard my cell phone ringing. Damn. I had left it upstairs in my craft room!

I ran past the front door and up the staircase two steps at a time, trying to get there before the phone quit ringing. No such luck. No message, but apparently my son-in-law was trying to reach me. Before I can get his number dialed back, the house phone begins to ring. Of course, it is downstairs. 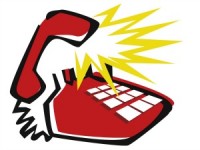 I run down the steps now, trying to get there before the third ring as it will go directly to voice mail. I’m out of breath by now and figuring I’m getting a bit of a workout already this early in the morning, I grab the phone in the middle of the third ring.

It’s my son-in-law. He wants to know if he can borrow my lawn mower. I tell him, “No problem, just let me get dressed and you can come over and get it.” 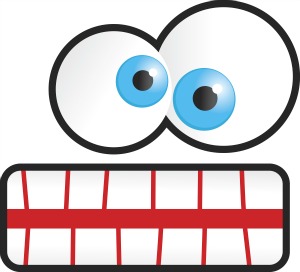 I pause for a moment, considering what he just said. My front door has two long windows on either side of it and it is positioned right in front of the stairway going upstairs. Those are the stairs, mind you, that I just ran up and down in nothing but my underwear.

There is a pause.

“I didn’t see anything”.

What is your most embarrassing moment?  Are you new to the Sitcom?  Be sure to check out my Frequently Asked Questions Page!

Previous post: Made a Photo Frame with Paper Tubes!