Creating Success around the World!

The worldwide blog hop tour, that introduces you to creative people from all corners of the globe.

Every Wednesday our hosts on each continent will introduce you to someone new whose creativity is inspiring! Come take this worldwide tour with us!

You can visit each host below and read about a featured creative person on each continent! All interviews are posted simultaneously around the world, resulting in one big crafting party.  And then, add your blog to the Blog Hop party below.  You could be featured in the next Around the World Interview!  Fame. Notoriety.  Pure Awesomeness!  It’s all in the touch of a keyboard button…

Our Guest Star this week is from….
North Dakota, USA 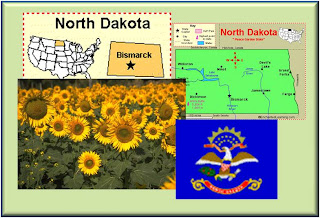 Today we are welcoming Tracy from Screaming Sardine.  Tracy comes to us all the way from North Dakota!  Quite a long flight I would imagine, but fortunately going from North Dakota to Georgia is all downhill.  So hopefully, she coasted the whole way.

My buddy Tom Selleck, his mustache and I have prepared the Green Room for her arrival.  Tom’s friend Kiefer Sutherland showed up last night, however, and things have been just a tad weird around here ever since.  Seems that Kiefer played the character Jack Bauer for so many years on the series “24” that he thinks he actually is Jack Bauer. It is rather off-putting as he won’t speak to anyone above a loud angry whisper and is constantly reviewing his iphone and trying to get someone named Chloe to “patch him in”.
Tom thought it would be good for him to take a small vacation here at chez Sitcom to relax a bit after playing such a difficult role for so many years.  Unfortunately, it doesn’t seem to be helping.  And when Tom asked him an innocent knock knock joke, he put Tom in a headlock and demanded to know who was there, who they worked for and where the damn bomb was!  It certainly doesn’t help that he has hired some dude named Alvin to tag along behind him and mutter “The following takes place between 8: 00 AM and 9:00 AM… “
So when Tom innocently mentioned that he lost his ipod last week, Keifer suddenly had a new mission. He would save the world one ipod at a time, starting with Tom’s.  A tracking device would be required along with satellite imaging and Chloe should be contacted to decode any encriptions in the database.  Whatever the heck that means.  And the whole Green Room has to be properly ransacked in an effort to locate the missing device and save the world from possible utter destruction.  Well at least to allow his buddy Tom to listen to his downloaded track of the Black Eyed Peas “Boom Boom Pow” again.  Because there are important things in life.
“I’m on the supersonic boom/Y’all hear the spaceship zoom/When, when I step inside the room/Them girls go ape-shit, uh”
Everyone is a suspect!  And nobody leaves the building until they are properly interrogated!


Oops, here is Tracy.  Come on, while he is busy frisking the dog, let’s slip into my office for the interview…

Suzy: Tell me a little about yourself, your family, your other hobbies…
Tracy: My family consists of myself, my teenage son, two wonderful dogs, and two cats.  My hobbies include crafting, cooking, being out in nature, and mastering knitting.  (Just learned how to knit…still need more practice to even remember how to cast on – lol)!  Once I get back to civilization, my hobbies will definitely include junking and thrifting!  When I have time – which is rare – I also love geneology. 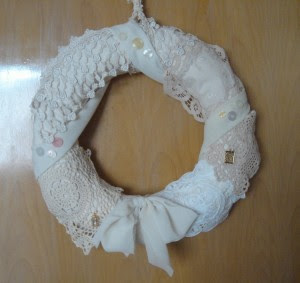 Suzy:When and why did you start blogging, and where would you like your blogging to lead?                              Tracy: This most recent incarnation of blogging started back in October, 2010.  I started in order to share my ideas and to be supportive of others.  At the end of May, 2011, I combined four blogger blogs into a self hosted WordPress blog at http://screamingsardine.net/ . 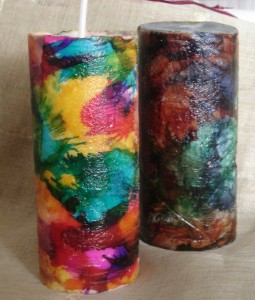 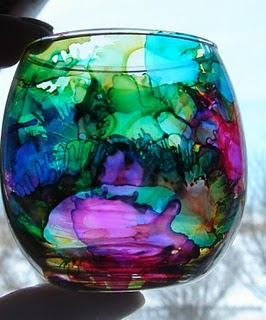 Tracy: I’d love for my blog to be a place to celebrate the creativity in all of us.  I do weekly (sometimes twice weekly) interviews of small shop owners, whether they sell their handmade items, craft supplies to artisans, and/or vintage items.  I also spotlight handmade shops on one of my other blogs:  Sunburnt Cow. I’m hoping to have people guest post there, which could simply consist of someone sending me the urls to their items, and I can work it into a post. 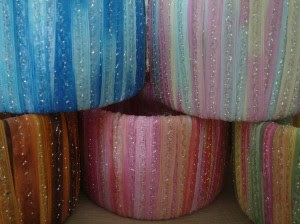 Suzy: Can you tell us a few things that most folks don’t know about you?
Tracy: I’ve lived in several different states:  Illinois, Hawaii, Arizona, Minnesota, Michigan (icky Detroit), North Dakota, and New York.  I’m also a huge tennis fan (Go, Roger Federer) and can trace my geneology on my g’ma’s side back a few hundred years BCE. 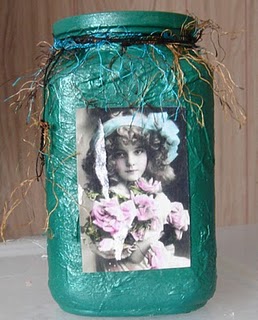 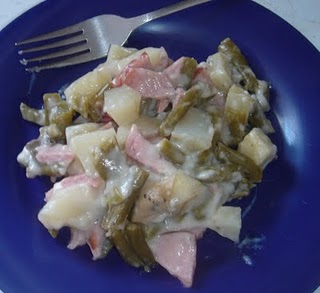 Suzy: Can you give any new bloggers out there some pointers that you might have learned along the way? Tracy:  Consistency, consistency, consistency.  It’s tough to keep on writing, especially when you’re new and you don’t have much of an audience at first, but you have to keep at it.  Eventually people will notice, and they’ll regularly go to your blog if you write on a consistent basis.  If you’re haphazard about posting, why would anyone take the time to check your blog out – only to find that it’s the same post that has been up there for a couple weeks or more? 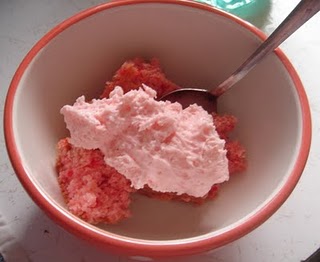 Tracy: Also, I think it’s important to go out of your way to help others.  Too many of the “big bloggers” don’t even notice us little guys.  I hope I will never get that way.  I always want to seek out others who need a little attention, whether I have 100, 1000, or 10,000 followers.

Suzy:  Since I’m also kinda a sitcom blog, my buddy Tom wants to know if you have a favorite movie star.  Other than him of course.
Tracy: I used to have a crush on Tom!  But as to movie stars, I really don’t watch movies all that much; I watch mostly TV.  Hmmm…I think Katey Sagal is amazing.  (I’m on a Sons of Anarchy kick right now).  Terry O’Quinn is a favorite, as well as Christopher Eccleston; Robson Green (I’m a huge Wire in the Blood fan); Viggo Mortenson (oh, hey, there’s a movie star!); Anil Kapoor and Necar Zadegan (both blew me away in 24); and James Morrison (of 24 fame).  Yep, I’m a huge 24 fan!
Suzy:  Funny you should mention that… 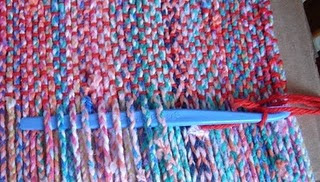 Suzy: This crafty blog community is full of wonderful folks.  Can you tell me what blogs inspire you?
Tracy: Practically all of them, so I can’t really single any out.  I get inspiration from so many different sources, even a cottage cheese container – lol! 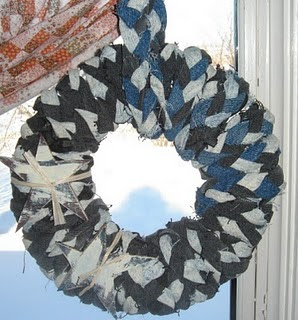 Suzy: Can you tell us a little about what you are promoting right now?
Tracy: Definitely the interviews as I mentioned above.  If anyone would like to be interviewed regarding their online shop, they can email me at iluvffmn at yah00 dot c0m.  They can also email me if they’d like to do guest posts on the Sunburnt Cow.  Additionally, I’m an independent consultant for Scentsy – so I’m always promoting that!
Suzy: Tracy, thanks so much for taking the time to come down for an interview!  Please take a moment and go check out Screaming Sardine.  You will find tons of inspiration there!  And if you are a crafter- take advantage of her interviews!  It is a great way to get your stuff out there!
Well, we had best get back to the Green Room.
And Alvin meets us at the door with “previously on 24…”  Seriously, Alvin.  Just shut it.
It seems that Tom has found his ipod.  It had fallen between the seat cushions of the couch.  Keifer was apparently bummed that the missing ipod was not the result of a terrorist plot as he had interrogated the couch to within an inch of it’s life.  Even threatening to kill off it’s matching love seat if it didn’t cooperate.  All to no avail.  Nobody double crosses Jack Bauer.  He would have to resort to his top secret Suitcase O’ Truth Serums and Torture Devices (SOTSTD for short).
“The following takes place between 11:00 AM and noon…” mutters Alvin.
Keifer was going to microwave a breakfast burrito, but the timer on the microwave was alarming to him, so he and Tom are headed out to McDonalds.   Keifer is planning to force them in his loud whisper to serve them breakfast after 10:30.   Because we all know that only Jack Bauer would be able to do that.
——
Want the chance to be interviewed by me, Tom Selleck and his mustache?  Come link up your blog to the international blog hop!