by Susan Myers on September 13, 2011
in Interview
The worldwide blog hop tour, that introduces you to creative people from all corners of the globe.

Every Wednesday our hosts on each continent will introduce you to someone new whose creativity is inspiring! Come take this worldwide tour with us!

You can visit each host below and read about a featured creative person on each continent! All interviews are posted simultaneously around the world, resulting in one big crafting party.  And then, add your blog to the Blog Hop party below.  You could be featured in the next Around the World Interview!  Fame. Notoriety.  Pure Awesomeness!  It’s all in the touch of a keyboard button…

Australasia- Jill from Creating My Way to Success
Europe- Yaga from The Shiny Bubble
Asia- Janelle from Of Pinks and Fairy Tales
South America- Dolly from Marya Mariah
This week our Guest is from Washington, USA! 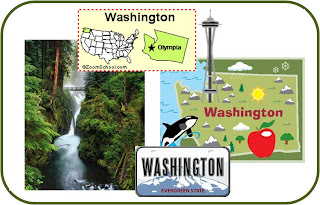 Today we are welcoming Erin who has a fabulous shop on Etsy called Xanadu 2 You.  Erin specializes in wire baskets and of all things, wire crochet.  Her work is amazing and takes a ton of patience and practice.  Erin comes to us all the way from the great state of Washington.  A long trip, for sure.  My buddy Tom Selleck and his mustache and I have spent all day fixing up the Green Room in preparation for her arrival.

We had it all pristine and ready to go, when Tom’s friend William Shatner called and asked if we could possibly allow a few celebrities over for an “After the Roast” party.  Seems that Bill and a few of his cohorts had just hosted a Celebrity Roast of Charlie Sheen.  They needed a place to have the after party and our Green Room was convenient.
Between you and I, Tom feels that he owes Bill a few favors.  You see Bill was originally planning to try out for the lead in Quigley Down Under years ago, when he found out that Tom wanted that role.  Knowing that if he tried out, he was a sure bet due to his natural acting ability, Bill decided to beg out of the audition.   I mean, who would be better suited than an actor who likes to rip off his shirt, weld a mean phaser and deliver strategically. placed. pauses. for. dramatic. effect?  Of course, Bill does not have “power of the ‘stache”, so it is quite possible that it would not have worked out in his favor.  I guess we will never know.
Anyway, Tom told him to bring everybody over and then promptly put on a pig to roast.  Because, really what better choice for an After the Roast party?
Charlie Sheen and Mike Tyson have already arrived and are busy prepping the bar area.  So, while it is relatively quiet still, lets take a moment to interview Erin!


Suzy: Tell me a little about yourself, your family, any other hobbies…
Erin:  I grew up with an engineer father and an artistic mother, and both of them rubbed off on me.  My sister and I are both in technical careers with intensive artistic bents on the side.  I love to participate in all kinds of art forms, including singing, pottery, chocolate-making, and using my crocheting skills to make hats, slippers, whatever.  I’m also very lucky to have received a very nice camera as a gift and I use it all the time, including taking all my own product photos, photographing my garden, and capturing my boyfriend at work blowing glass. 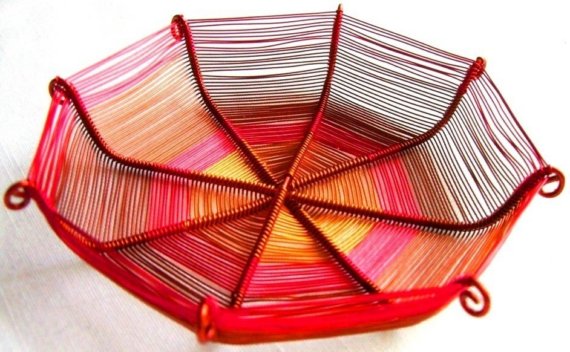 Suzy: Your crocheted wire baskets are amazing.  How did you get started with designing wire baskets?  Can you give us an idea of the process?
Erin:  In 2007, I found myself unemployed, and I began selling silversmithed jewelry at a local farmer’s market to supplement my unemployment income.  I quickly learned that everybody makes and sells jewelry, so I had to find something different to do.  I had some magnet wire on hand, and experimented with what I might make from it.  My first wrapped wire basket was intricate but terribly scraggly.  Eventually, I tried crocheting with wire- not an easy thing to do.  It has taken four years of crocheting with wire to really master the process. 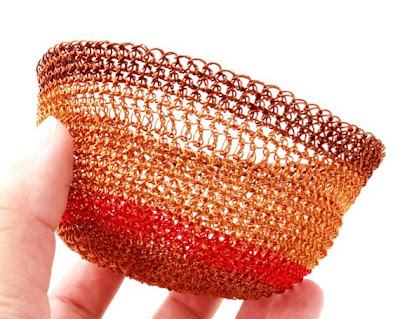 Suzy: Can you tell us a few things that most folks don’t know about you?
Erin:  Living with a world-class chef and sommelier is a double-edged sword. I don’t cook, and I know nothing about wine, but my better half is an expert on both, and keeps me very well fed. It also necessitates lots of aerobic exercise, which is not my favorite thing.
While I don’t cook, I do love making fine exotic chocolates and truffles, and hope someday to launch that as another business venture. 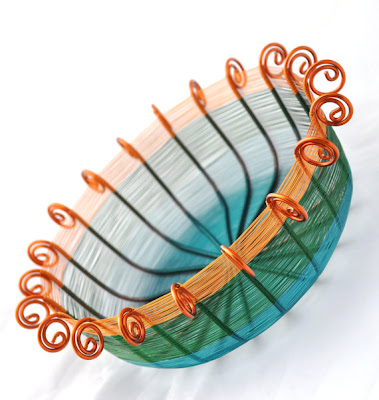 Suzy: I understand that you got the “honor” of appearing on Regretsy. I love the fact that you responded with a sense of humor. Can you tell us a little about that?
Erin: Regretsy makes fun of bad art, and of the silly conventions that pop up on Etsy to sell art, good or bad. One of those silly conventions is “personification” of inanimate objects. Some of my larger, more intricate crocheted baskets seemed to have personalities of their own, so I wrote stories to match.
Erin: I admit, the practice really is contrived, but I’ll be darned if I didn’t immediately get more traffic, and start selling some of them! What’s fun about the Regretsy feature, is they were making fun of a practice I agree is laughable, but most of the comments were complimentary of the craftmanship itself, so it worked out just fine! 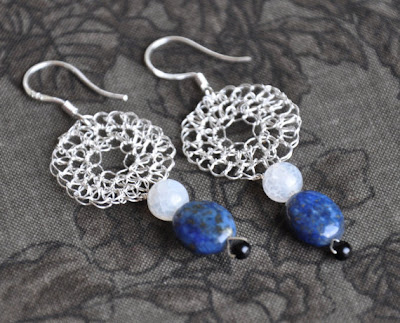 Suzy: I know you have a very busy life. I also know first hand how time-consuming running a craft shop is. How do you schedule it all in?
Erin:  First and foremost, after about 2 years of unemployment, I now focus on earning a paycheck at my full-time job as an energy analyst, which means my wirework definitely takes a back seat. Frankly, to be successful at making money on Etsy requires a lot more time and dedication than I have in my schedule.
Erin: So while I maintain my Etsy shop, I don’t post everything I make in it, and I rely much more heavily on the in-person craft shows I do to make ends meet. I do love the Etsy community, however, and find it to be a fantastic place for networking with other artists, and for showcasing my work. 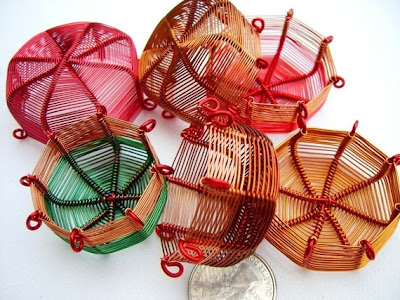 Suzy: Can you give any new Etsy sellers out there some pointers that you might have learned along the way? Erin: Listen to, and seek feedback. There’s always someone out there who has done what you’re doing for longer than you, and has pearls of wisdom to offer. The greatest thing about Etsy in my experience, is the worldwide COMMUNITY of artists that it offers. Also, subscribe to and read the emails Etsy sends out. Etsy Admins are great at compiling the artists’ pearls of wisdom and disseminating them in bite-size pieces. 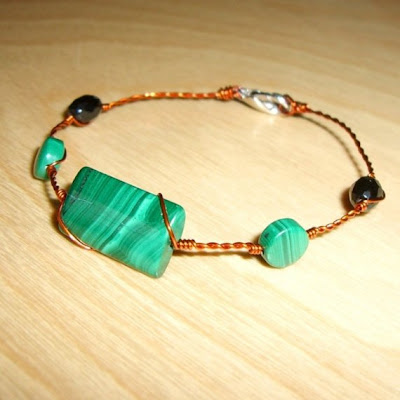 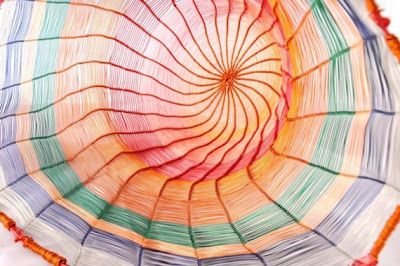 Suzy: This crafty blog community is full of wonderful folks. Can you tell me if there are any art or crafty blogs out there that inspire you?

Erin: I’m not much of a follower of blogs. It’s the artists and work I see in person that inspires me most. Some of my current favorites:
Mary Clymer, artist and shop owner of Happy Delusions, in Renton, WA, who makes her living by promoting dozens of other artists’ work in her delightful little shop: Happy Delusions.
Paul Marto, photographer extraordinaire, who does other things for a living, and does wildlife photography to live:  Marto Photography.
Susanna Tam- silversmith, whose jewelry is as elegant as she is:  Sustudio Jewelry 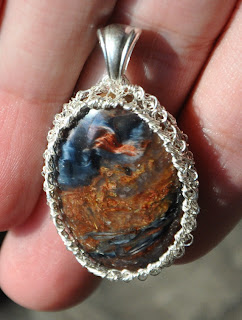 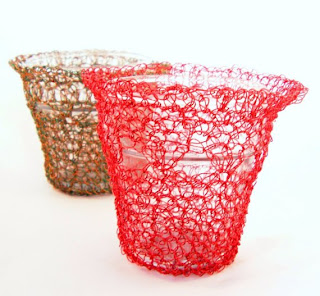 Suzy: Can you tell us a little about what you are promoting right now? Erin:  Currently, I am struggling with crocheting fine silver wire wraps around a variety of cabachons and gemstones. Some of them are easier to do than others — but some of them, such as this sapphire have been an exercise in patience and persistence! After 7 attempts, let’s just say my fine silver scrap pile just got a little bit larger, and I may have to cash it in soon for a new spool of wire!
Suzy: Erin thank you so much for taking the time for the interview!  Please take a few moments to check out Erin’s shop, Xanadu 2 You.  There is so much there to look at and everything is absolutely amazing.  With Christmas just around the corner, I’m betting you just might find something unique for a special person.
Excuse me Erin, that’s my cell phone.
Hello?
Seriously?  You couldn’t stop him?  Sigh…
Well Erin, we need to get out there and rescue Tom’s buddy Bill.  Seems that the party started getting out of hand and Steve O, who already broke his nose on Mike Tyson’s fist during the taping of the show, (Seriously, I’m not kidding), has decided to take on Bill and his phaser welding abilities.  With no phaser in sight, Steve O substituted a hot glue gun.  My hot glue gun to be exact.
Bill’s extended group of fanatics (you know, the ones that follow him around while wearing spock ears and talking in Klingon) jumped in to defend their “captain”.  You would think they would have noticed that the glue gun was unplugged the whole time, but I’m guessing there isn’t a lot between those fake spock ears.  Of course, Charlie had to jump into the fray as he has that “tiger blood” and all and Mike Tyson had to join because, well he’s Mike Tyson.
Since Bill doesn’t currently have anybody available to beam him up, we probably better try to get him out of the pile-up.  Erin, if you and Tom could grab my National Enquirer collection and move it to safety, I’ll go get the hose.  Nothing breaks up a ridiculous dog fight faster than a good spray, I always say.  Besides that, I think a few of those trekkies could really use a good shower.  Just saying.

If you would like the opportunity to be interviewed by me and my buddy Tom and his mustache, link you blog or shop up to our international blog hop!!

Next post: 14 Thoughts on the Reality of Coupon Shopping