by Susan Myers on September 16, 2011
in holiday crafts 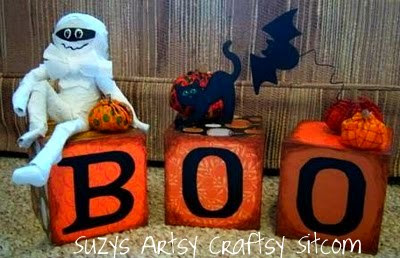 So I’m not much of a Halloween decorator. It’s not that I have anything against Halloween. I’m just not a fan of the color orange. You see, I had a traumatic experience with the color orange back in first grade. It was never my favorite color to begin with. When I started school in a brand new Elementary School, they hadn’t gotten all their supplies yet. Because of that, we were each assigned one big fat crayon to learn to write with. That would be our assigned writing utensil for the next month as for some reason, the supplies were delayed. Of course, my assigned big fat crayon was orange. I still haven’t gotten over it.

Then there is my issue with spiders.

But after perusing all the awesome Halloween crafts here on the net, I started feeling a little left out. So after some thought, a few ideas came to my head, along with a plan on how to finally use these: 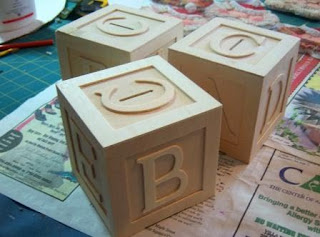 I found these blocks at the major discount price of fifty cents each at Michaels some time ago. There were only three, and I had absolutely no idea what I was going to do with them, but at that price I couldn’t afford not to buy them. So they have been sitting patiently waiting in my craft closet for inspiration to strike. And it finally did. 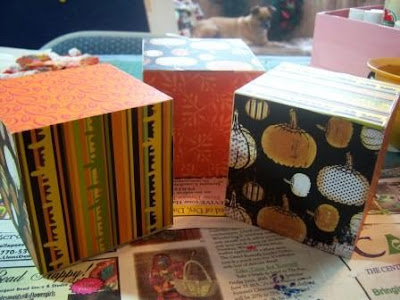 The blocks were embossed with letters, so painting them was out of the question. Instead, I cut out 4″ squares of the Halloween themed cardstock and using Mod Podge, put them on all sides of the blocks. 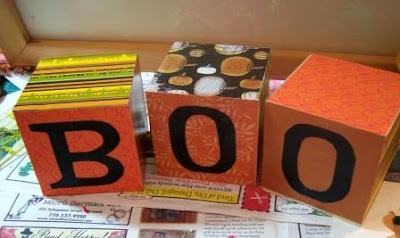 I then cut the word “Boo” out of the black card stock. Vinyl lettering is a good substitute here, but I’m a cheapskate, so I cut my own letters. I then used the Mod Podge to glue those letters onto the blocks. 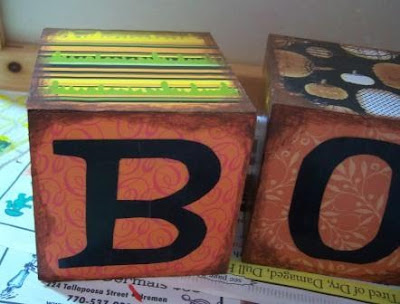 Using a dry brush and a bit of burnt sienna acrylic paint, I added brown to the edges on all sides to give it a deeper, warmer look. Just add some paint to your brush and brush it across some paper towels to get extra paint off, then lightly brush onto the block corners. 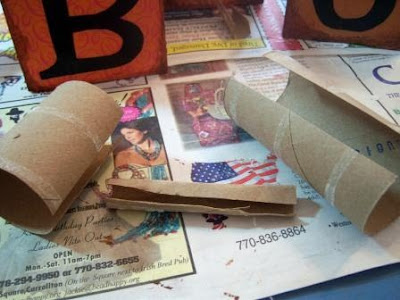 Now, lets add some stuff!! I have been collecting toilet paper tubes for some time now. No particular project in mind yet, but you never know. So for this project, I pulled two tubes out of the stash and used them to make the frame for my mummy. Cut one roll lengthwise, then at about the 3″ mark. Use hot glue to glue it back together, overlapping so that the circumference will better fit your 2″ wooden head. (This is the mummy body). For arms, take the rest of that tube and cut two 4″ x 1″ pieces. Roll each lengthwise and glue along the seam. Bend each at the “elbow” and “wrist”. Puncture two holes at the top of the body around the shoulder area and insert each arm, glueing with hot glue. 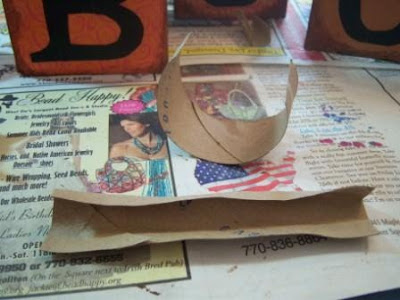 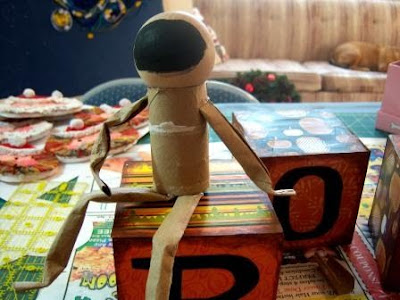 Using the second toilet paper tube, I cut it lengthwise, then cut two 5″ x 1″ pieces for the legs. Roll each lengthwise and glue along the seams. Bend each at the knee and ankle. Glue them onto the bottom of the body. Finally, glue the 2″ wooden ball to the top of the body, and paint the front of it black. This will eventually be the face. Kind of looks like Marvin the Martian at this point, doesn’t it? 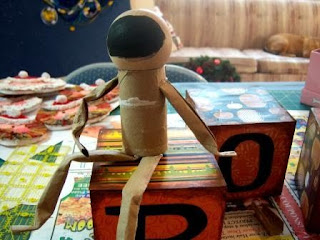 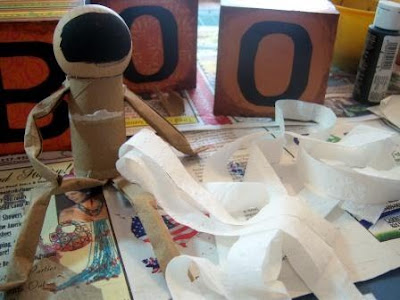 Now, take some toilet paper and cut it into 1/2″ strips. Marvin really needs some clothes. 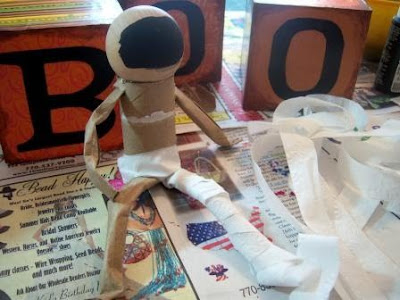 Starting at one of the feet, wrap it around the foot and up the leg to the torso, tacking it here and there with hot glue. Do the same with the other leg, then up the torso and to the arms. Then wrap the head, leaving a section in the front open for the face. 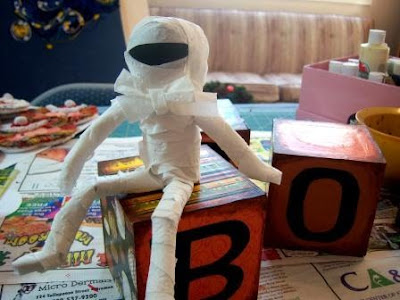 With a leftover strip, I carefully (this might take a couple tries as toilet paper is kinda fragile) made a bow and then glued it under his chin. 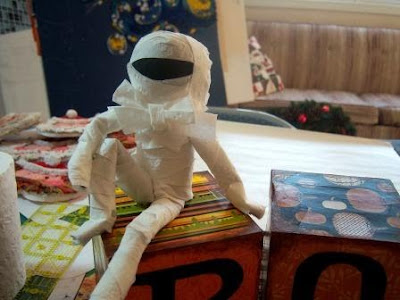 Now take your mummy buddy, Marvin, and glue him down to the top of the B block, positioning him comfortably. 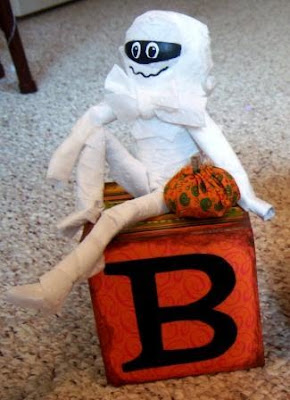 Paint the eyes in with acrylic paint. 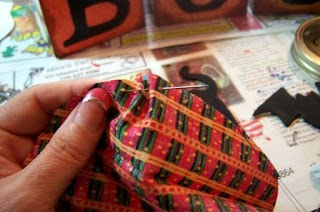 To make fabric pumpkins, cut some fabric into 7″, 5″ and 4″ diameter circles. With a needle and thread, sew a running stitch about 1/4″ inch from the edge on the wrong side of the fabric. Gather the fabric, stuffing with fiberfill as you go, until the gathered edges meet. Tie it off. Using scraps from your second toilet paper tube, cut small 1/2″ x 1/8″ strips and roll them to make stems. Glue them onto the top of the pumpkins. 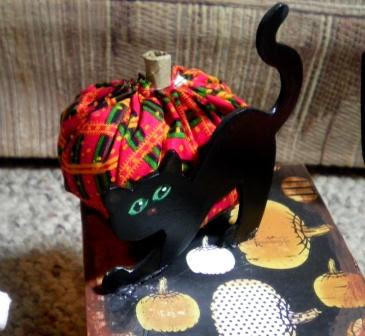 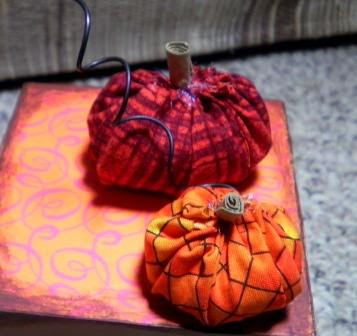 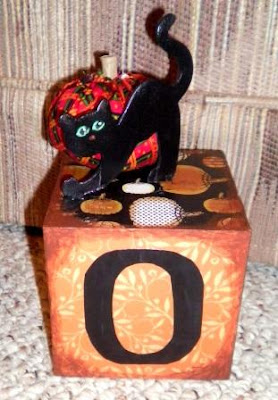 I used a wooden cut out of a bat and a cat, and painted them both black. Place the cat and several pumpkins on the first “O” block and glue them down. 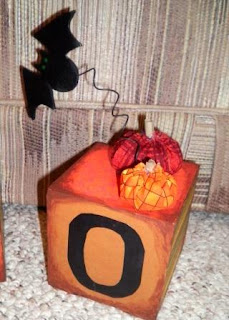 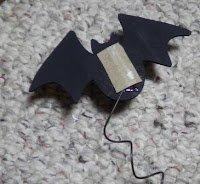 Drill a small hole in the second “O” block about 2″ from the front on the right side. Cut about 8″ of heavy gauge wire and wrap it around a pencil to form loops. Cut another scrap of toilet paper tube to glue down on the back side of the bat. Glue on the side edges to create a “pocket” for the wire. Glue the wire into the hole in the block and into the pocket of the bat. Adjust for the best effect.

All done! A Halloween project completed with no spiders. And I even got over the orange thing briefly. Well, I’m still traumatized, but I’ll live. 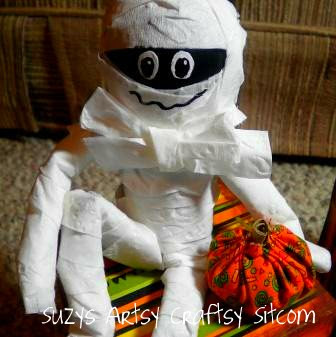 Marvin has become a world traveler!!  Stay tuned for my next post as we will be starting a Marvin the Mummy contest this week!

Previous post: 14 Thoughts on the Reality of Coupon Shopping