1.  My son-in-law is deploying this month, so rather than live by herself, my daughter has moved back in.  Which isn’t necessarily an issue, but my husband and I had grown accustomed to having the house to ourselves, so there has been a bit of adjustment to do.  We have to accommodate each other’s schedules, I have to cook more often, there is much more laundry that needs done, and of course there is the fact that the hubby and I can’t run around naked any longer.

2.  Well, not that we actually did run around naked, but there was always an option, you see… 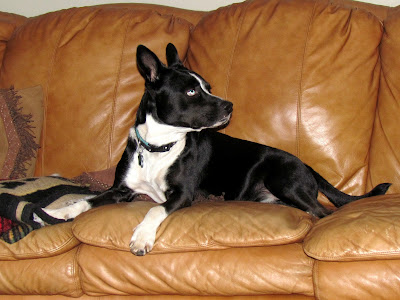 3.  Along with the daughter came another house guest.  Meet Lady.  Yep, we now have four dogs at the house. What’s one more dog when you already have three.  Right?  Yeah, right.

4.  Lady is a very sweet dog that my daughter rescued from the pound about six months ago.  She is young and has several bad habits that probably should be addressed.

5.  I got over the fact that she will literally knock the air out of you in her excitement to see you at the end of the day.  I learned to step to the side at the last moment to avoid massive collisions of doggy parts and my chest cavity.

6.  She has a bad habit of knocking the glasses off of your face when she goes in for a hug too.  We all made mental notes to protect our eyeware. 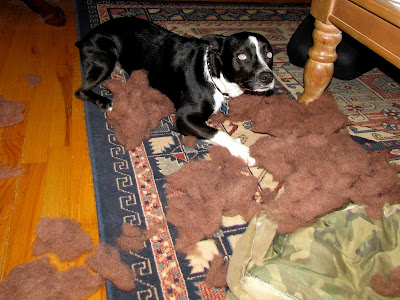 7.  Then there was the thing with the need to remove stuffing from anything that could possibly by stuffed.  We adjusted for that and are keeping a wary eye on her when she is around the sofa. 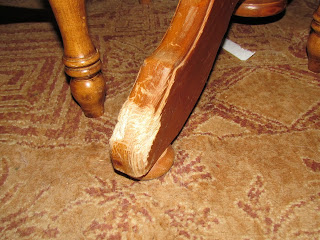 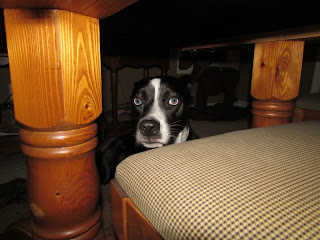 8.  The thing with the leg to my diningroom table.  Ummmm….not cool, dog.  We have since blocked off access to the dining room for her and any other dog that happened to see her do it.

9.  The thing with jumping over the baby gates.  Totally not cool.  Other doggy eyes were watching and taking notes…

10.  I’m sure that they take notes.  Most likely notes with poor spelling, bad penmanship (the no opposable thumb thing), and sketchy sentence structure.  But they definitely take notes. 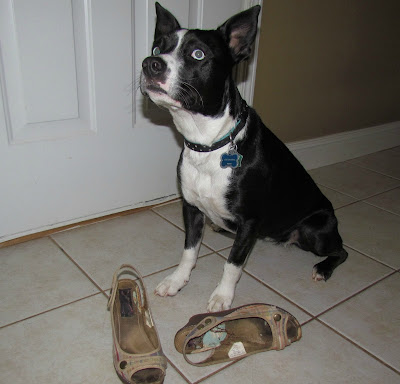 11.  The thing with my most comfortable pair of pumps.  Really?  You just snacked on the dining room table leg.  Shouldn’t you be full? 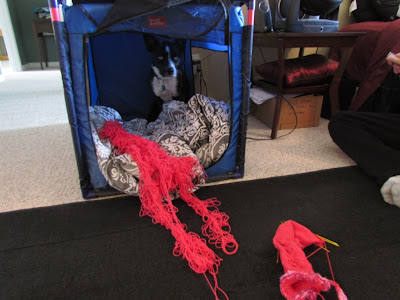 12.  But the last straw was the day I found my knitting strewn all over the living room, with a trail of yarn that lead me to our friend Lady and her doggie abode.  This was a $23 skein of yarn attached to my sock project that I had been knitting for nearly a month.  After I got over the initial freak-out, I patiently explained to her that she was very fortunate that the sock was untouched, as doggies do not have nine lives like cats do.  And if she kept up this particular habit, she could very well be replaced by someone of the feline capacity.

13.  She was appropriately appalled. 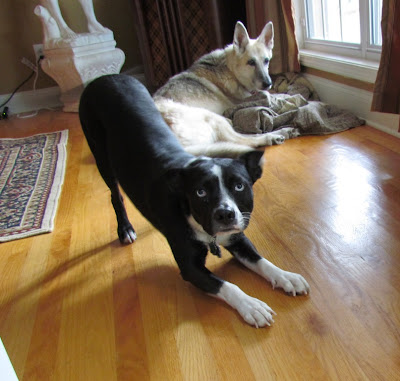 14.  Good thing that she is really cute.