by Susan Myers on November 15, 2011
in bead art, Interview
The worldwide blog hop tour, that introduces you to creative people from all corners of the globe.

Every Wednesday our hosts on each continent will introduce you to someone new whose creativity is inspiring! Come take this worldwide tour with us!
You can visit each host below and read about a featured creative person on each continent! All interviews are posted simultaneously around the world, resulting in one big crafting party.  And then, add your blog to the Blog Hop party below.  You could be featured in the next Around the World Interview!  Fame. Notoriety.  Pure Awesomeness!  It’s all in the touch of a keyboard button…

Our Guest this week is from Connecticut, USA 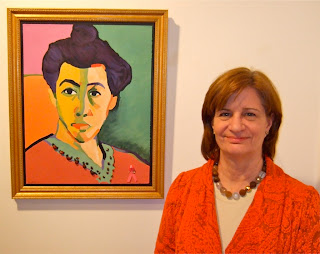 Our guest star this week is Peggy Dembicer.  Peggy is an amazing mixed media artist that comes to us all the way from Connecticut.  I can’t begin to describe how breath-taking Peggy’s work is and had major difficulty choosing which works to show you here, so be sure to swing by her website and her on line Gallery to see some of her other art.  Peggy has many specialties, but the one I can’t get enough of is her amazing beadwork.  She put thousands of hours into her works and each one is absolutely fabulous.
My buddy Tom Selleck, his mustache and I wanted to roll out the red carpet for her, so he asked his good friend Alex Trebek to stop by.  Alex is on his way down to Florida for vacation, but agreed to swing by here to say “hi”.   Tom was very excited to see him.  They used to be regular poker buddies, playing a foursome with Bob Barker and Brad Pitt every Wednesday night.  Angie wouldn’t let Brad gamble around the kids, so they always substituted animal crackers for poker chips.
But they really haven’t seen each other since that unfortunate poker match years ago when Bob accused Tom of eating five of his poker chips when he had his back turned.  To this day, Tom claims his innocence and swears that he saw one of Brad’s kids eating something other than a cheeto.  But there were apparently several crumbs in his mustache that did not escape Bob’s scrutiny.  And we all know about Tom’s weakness for cookies…
Not to mention Alex had gotten tired of Bob always calling him “Wink” and asking to buy a vowel.  You know two could play at that game.  Alex always took the high road, but he certainly could have stooped to a few jabs about Bob’s “Phil Donahue hair” and how it makes him look like Vanna’s Dad. And he never understood how Bob could give away a year’s supply of Turtle Wax as a “lovely” parting gift and still keep a straight face.
But Alex let it go.  Because he is classy like that.
So while Alex and Tom catch up, lets take a few moments to interview Peggy…

Suzy: Tell me a little about yourself, your family, your other hobbies…

Peggy: I live in Avon, CT, as a transplanted New Yorker. I work full time in the insurance industry and spend my early mornings and weekends in my studio. I can’t imagine a life without art, it makes me content. I am married, with three grown daughters, two wonderful sons-in-law, and two beautiful grandsons who live close by. They are such a delight. My extremely supportive husband photographs all of my work and does many gallery runs, dropping off and picking up my work for exhibits. 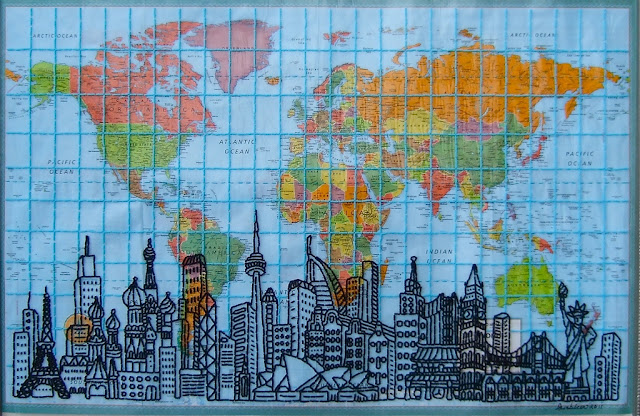 Peggy: I am active in a number of CT galleries and display my work regularly in group and solo shows. I love to visit Museums, subscribe to Art magazines in paper and online, and browse through Flickr for pure enjoyment. I read at least one good novel every 6 weeks, watch Jeopardy and Wheel of Fortune every night, love Project Runway and The Next Great Artist. 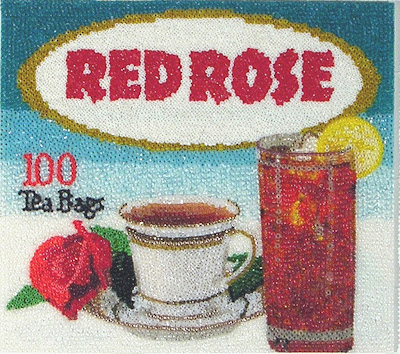 Suzy: Your bead art is simply amazing.  Breathtaking.  Can you tell us how you got started creating art with mixed media?
Peggy: I took my first weaving class over 30 years ago. I dove into weaving with great enthusiasm and it became the foundation of all that I have done since. I explored tapestry for many years but after discovering woven paper art at a Craft Fair I went wild in a new direction. I love to work with gorgeous papers, weaving them together and embellishing them with fibers, wires, and beads. 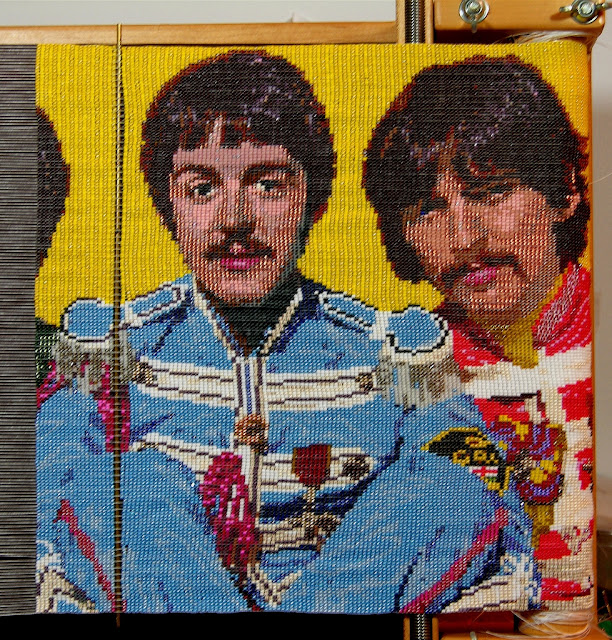 Peggy: A little Indian Bead Loom launched me in another direction. My background in tapestry inspired my beadwork to move away from the geometric and towards pictorial images. The beauty of the beads themselves challenged me to use them in a variety of forms, including glued into mosaics, embroidered on fabrics, and embedded into polymer clays. 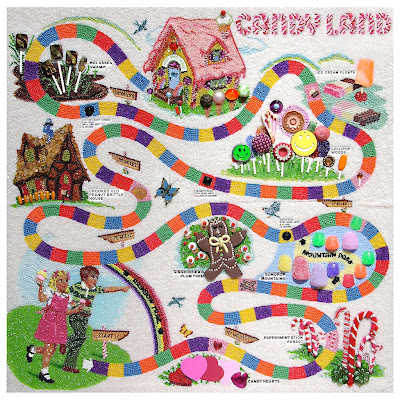 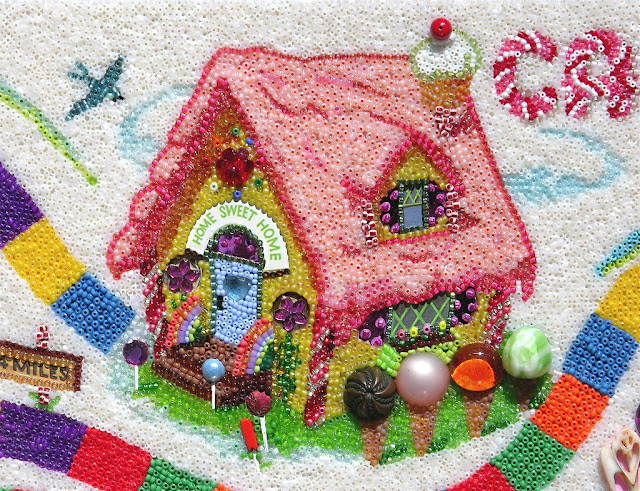 Suzy: One of your works that particularly caught my eye was your beaded Candy Land Game board cover.  How many hours did that take, and how did you come up with the idea?
Peggy: The Candy Land game board took me many months to complete. It is a bead mosaic that is executed right on top of the original game board. I modified the design somewhat, created some embellishments out of polymers, and just pushed through it land by land, gluing bead by bead, always thinking of the next land while working on the current one. It was great fun to do but an even greater joy to finish!

Peggy: The recognition that piece has generated has been extremely fulfilling. It has kept me moving in a Pop Art direction. My Beatles Tribute Series and the Monopoly Box are examples of some of my other intense Pop Art pieces. 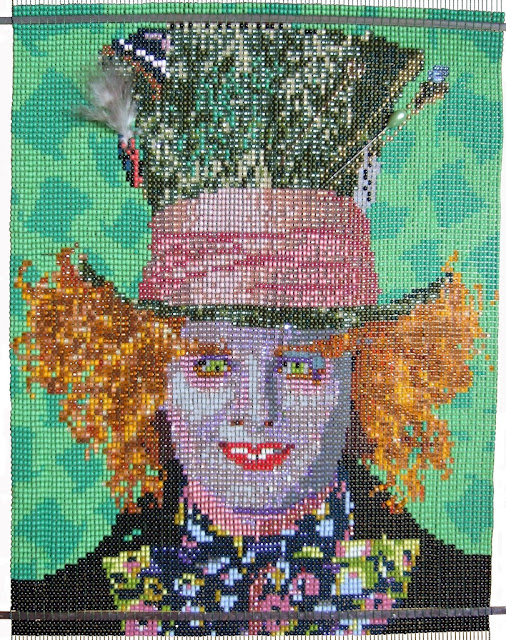 Suzy: What other forms of art do you concentrate in?
Peggy: I started painting about a year ago. I have a lot to learn and I am going full speed ahead into oils. I have tried egg tempera as well but probably won’t pursue it in depth. Right now I am finishing an oil painting of The Mad Hatter, after just having completed the same design in a woven bead tapestry. I like the idea of the double study of the same image. I may play with that concept for a while. I am also combining paints with beads and paints with embroidery. 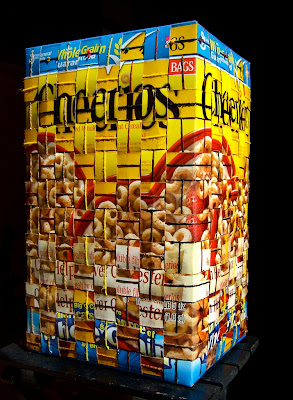 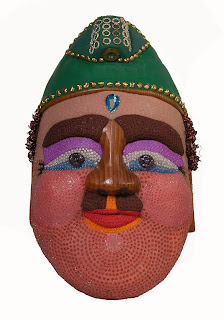 Suzy: Can you tell us a few things that most folks don’t know about you?
Peggy: I exercise daily, walking at lunch and doing calisthenics at home, it is great thinking time and it keeps me going, literally. My large production and tapestry looms stand idle now. My attic full of yarn is collecting dust. I don’t know if I will ever get back to pure weaving but I cannot part with the equipment. When I retire from Corporate America I hope I will make the time to warp them up and get back to my where I first began.


Suzy: Peggy, thank you so much for taking the time to be interviewed! Please take a few moments to swing by Peggy’s website, Peggy Dembicer, or her on line Gallery to see more amazing works.  One thing I loved about her Gallery is that she goes into some detail of what each work entailed.  You will be fascinated.  I promise.
Well, we’d best get back in the Green Room.
Lindsay Lohan is here doing some of her community service hours and I had asked her to make sure the place was spiffed up.  As luck would have it, she has been on her cell phone since she got here trying to line up some actress work.  The naked Playboy shoot doesn’t come out until next year, and she really needs a gig until then.
Unfortunately, she had no idea who Alex was and when she asked him if she could fill out an application to turn letters, everyone in the room held their breath.  Alex patiently told her that there was no “letter turning” in Jeopardy.  Unfazed, she asked him if she could help present the showcases, or maybe hold a suitcase.  And it didn’t help matters when Tom couldn’t control himself and shouted out, “I’ll take “Washed up game show hosts” for 400, Alex!”
Come on Peggy, Alex looks a bit irritated, so let’s take him out to Chick Fila before he leaves.  I have a coupon.  I’d love to know how they decide what goes behind curtains one, two and three.
Think he’d mind me asking?
__________________________________________
Want a chance to be interviewed on the Sitcom?  Want to meet lots of great bloggers from all over the world?  Want a bit of free advertising?  Well then link your blog up to the international blog hop!

Previous post: Lessons in Life: Don’t scare the crap out of your mom