This project was sponsored by Disney and the movie Monsters University!  All opinions and the project are my own.

Here at the Sitcom, we do silly Halloween.  I am opposed to scary simply because being scared is not one of my favorite things.  So when I found out that the Monsters University Movie will be available on Blu-ray Combo Pack October 29th, I was not only excited to see a monster movie that makes me smile, but inspired to create!   My creation?  A Jar O’ Monsters inspired by Monsters University! 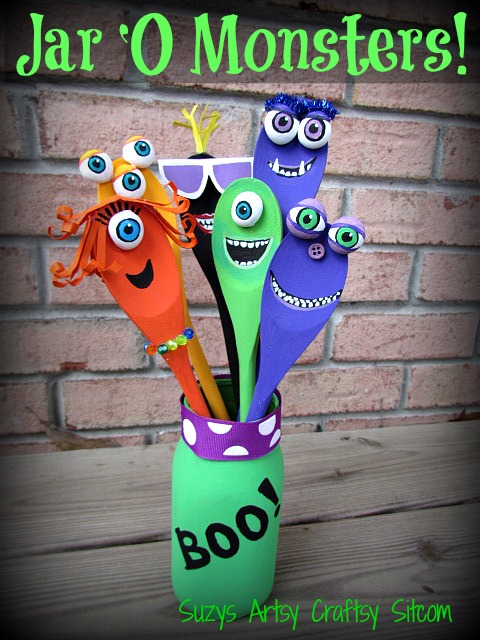 Monsters University, created  by Disney Pixar, is the hilarious story of how two mismatched monsters met and became lifelong friends.  Monster, Mike Wazowski (Billy Crystal) crosses paths with hotshot James P. Sullivan, “Sulley” (John Goodman), while attending Monsters University.   The pair’s out-of-control competitive spirit gets them both kicked out of the University’s elite Scare Program. With their dreams temporarily dashed, they realize they will have to work together, along with an odd bunch of misfit monsters, if they ever hope to make things right.

The Blu-Ray DVD contains hours of exclusive bonus extras, including an inside look at the world of monsters and the animated theatrical short film “The Blue Umbrella.”

The kids will love it!  Well, who am I kidding- the adults will too!  You can now pre-order the movie online !

Inspired by this hilarious prequel to Monsters, Inc., I decided to create a Jar O’ Monsters emulating some of the wonderful characters from the movie! 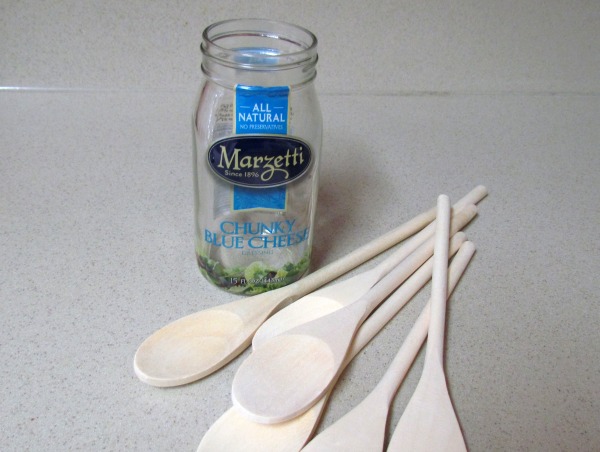 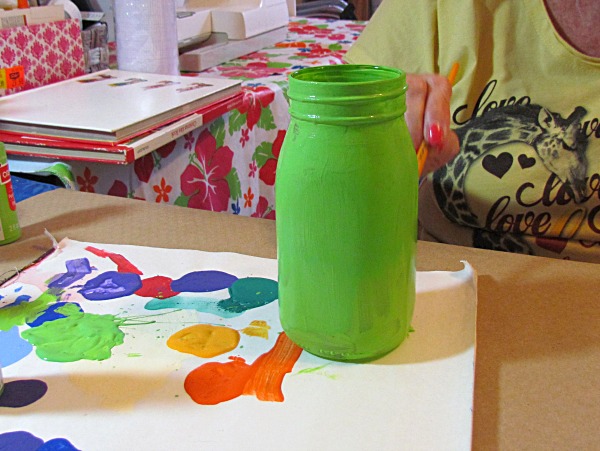 I have been collecting these salad dressing jars for a while now.  I love the shape of them!  And now I have a project in mind for one!  Begin by painting the jar a bright green.  It will take more than one coat of paint and you will need to allow it to dry between coats. 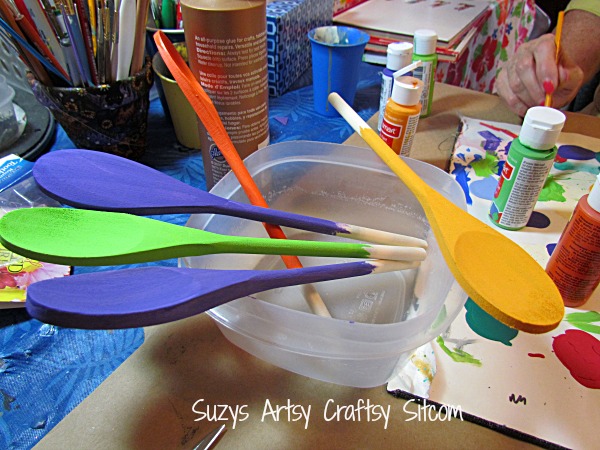 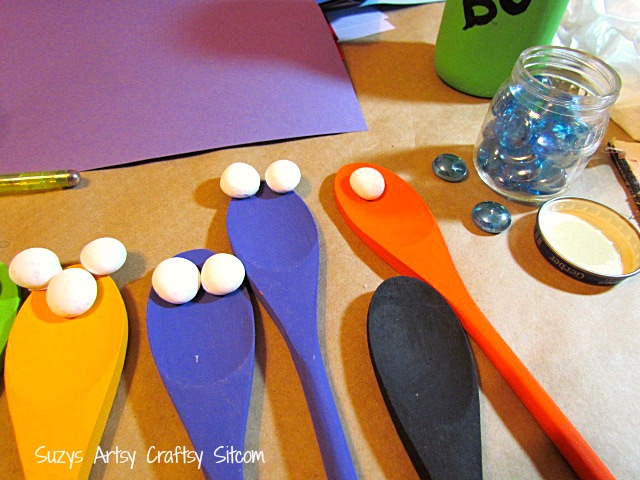 While the jar is drying, paint the wooden spoons some bright monster-like colors.  Also in preparation for creating the monsters, paint a bunch of cabochons white.  Again, it will take several coats of paint.  Once the eyes and spoons are painted, begin by gluing the eyes in place with hot glue.  As you can see, there is a never-ending variety of choices as to placement and numbers.  No two monsters are alike! 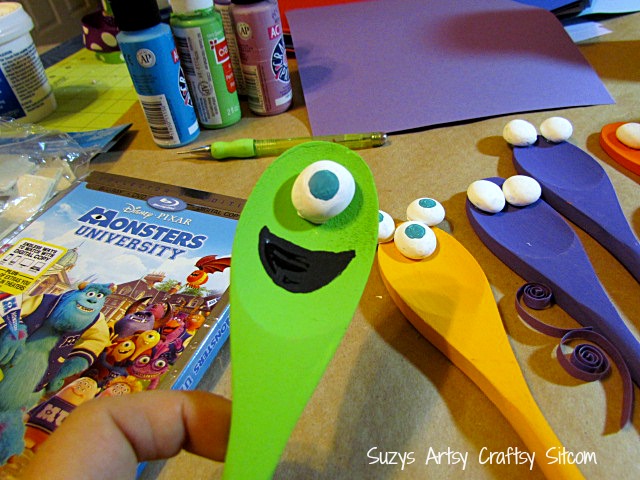 What makes these monsters come to life are the details in the eyes.  Choose a color for the iris and paint a large dot of color in the center of the eye. 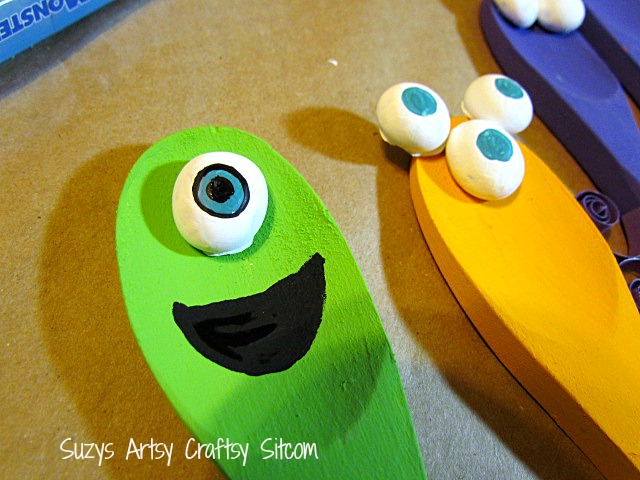 Using black, paint a line around the iris, and a pupil in the center. 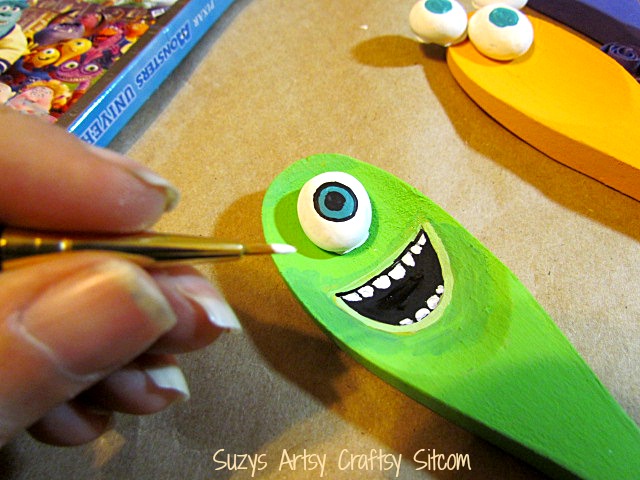 The final touch on the eyes is to add a dot of white. 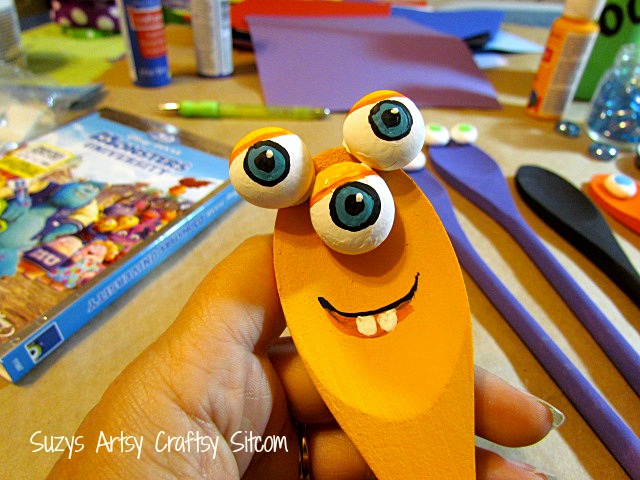 Some monsters have eyelids!  Paint the eyelid, then add a darker line of color on the bottom of the eyelid. 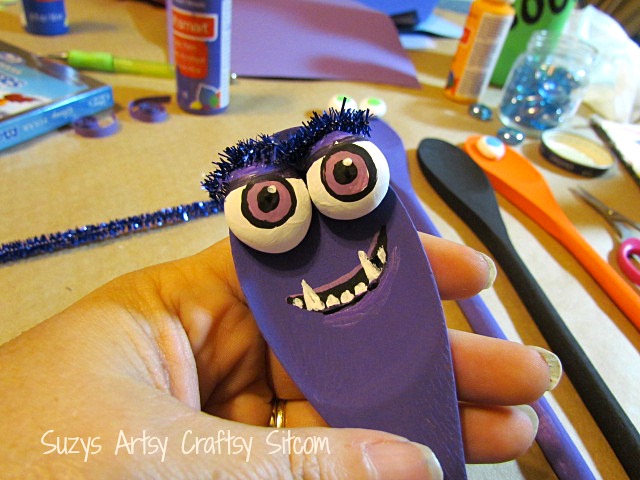 Some monsters have busy eyebrows!  A pipe cleaner makes a great uni-brow! 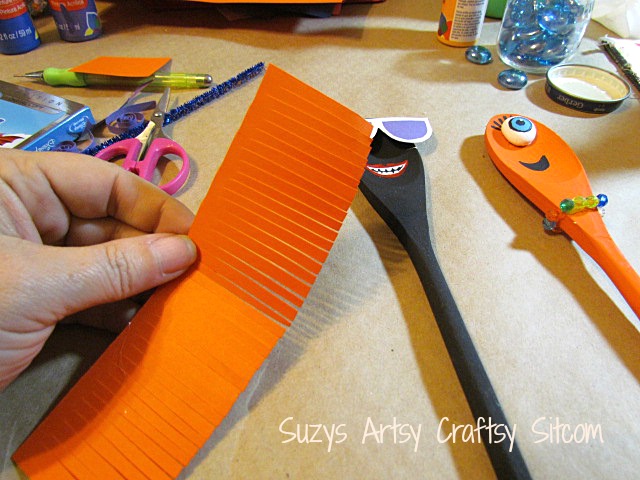 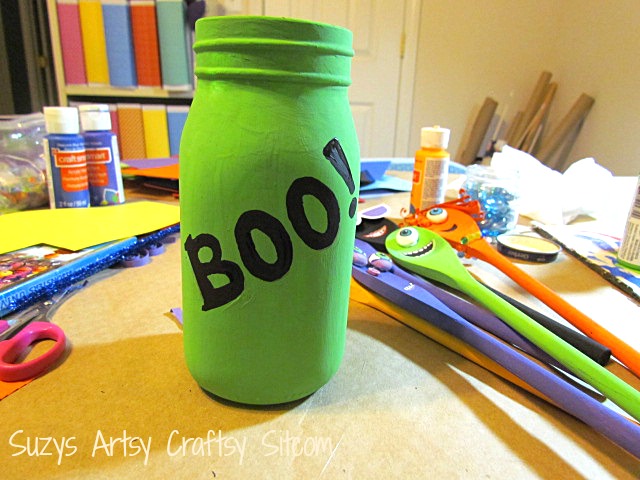 Some monsters have hair!  Cut a 2″ wide strip of paper and cut a fringe in one side.  Glue in place, and curl the ends of the hair using a quilling tool, or your fingers.  The final touch on the jar is to paint the word “Boo!”.  The jar and the spoons, once dry, are sprayed with a clear acrylic sealant. 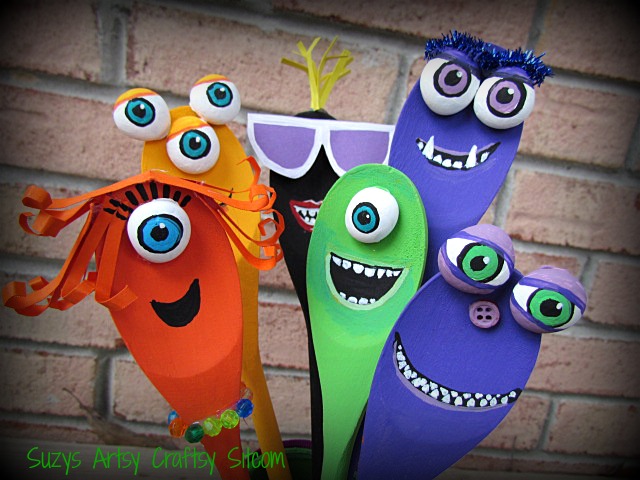 And there you have it, a mess O’ monsters! 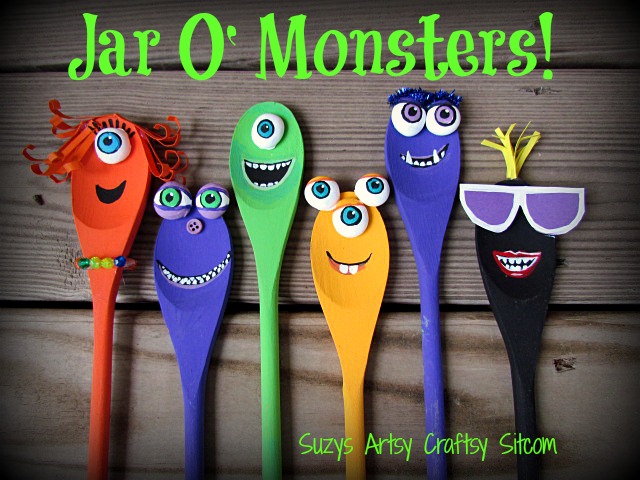 Each with their own personality, and each vaguely based on some of my favorite monster characters! 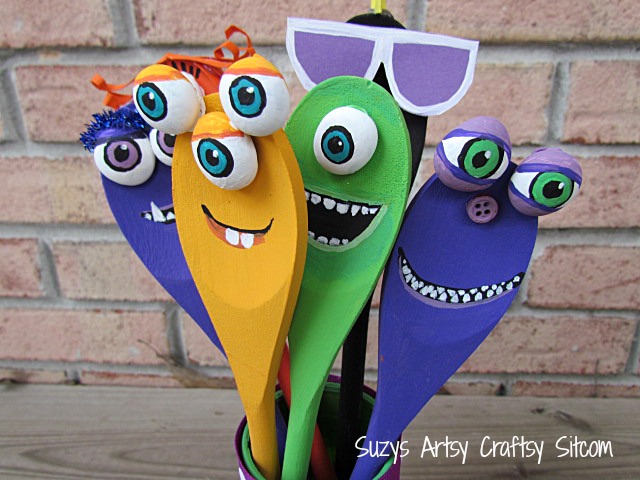 For more information on the Monsters University Blu-Ray DVD, be sure to visit :

Check out the projects below!