This past weekend, we took the motorcycle and went to the Chili Cook-off in Stone Mountain. Yep. Probably not the best idea for someone that is trying to get a hold on that food-eating thing, but my husband suggested it and I really never like to turn down something he suggests. Simply because he does it so rarely. He would be more than happy to sit back and let me plan the rest of his life for him. Which if you think about it, would be a dangerous proposition… And then there is the chili thing. I really do like chili. 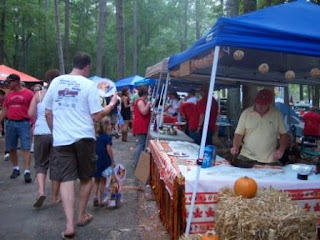 So we pay a fee to get in and there are booths with chili as far as you can see. There had to be hundreds of them. Each booth had their cooking utensils going, tons of pots of chili and little serving cups lined up for those of us who were voting to sample. So with an enthusiastic start, we hit the first booth. And then the second and then the third and we kept on going, downing a small cup of chili at each booth as the cooks watched you with anticipation, just knowing that at any moment one of us would nod emphatically, say “That is the best darn chili I have ever had!”, and drop our ticket stub into their vote jar.

I would say now to anyone who wants to actually compete in a chili contest that it would be best to get a booth at the front of the show. Because after about the first 20 booths, the chili started to taste the same. And then we started to slow down. Did I mention that it was 95 degrees in the shade? Ever try to eat chili on a hot summer day? 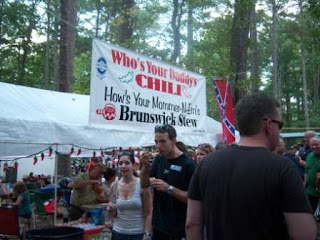 After a while, we slowed down to a crawl. Bypassing more booths than we stopped at while we were careful not to make eye contact with the chili cookers. Because one look that way and you were committed to try a cup of their offerings while they stood there expectantly waiting for your vote. And frankly, I was up to my eyeballs in chili. I couldn’t take another bite.

At some point, we emerged from the crowded booth area all bloaty and burpy and headed for some shade to rest and do some people watching. Which was quite amazing by the way. There were several live bands there to entertain, including a cover band that played music from the Blues Brothers movie. I saw at least ten different women in four inch heels. I have to say that while I do like to look good, I’m not going to torture myself walking around a huge uneven field in the hot sun eating scalding chili in four inch heels. 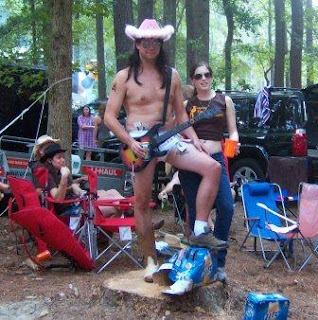 And then there was this dude. I have no idea why he was there in his tighty whiteys. But I’m willing to bet he was a marketing ploy for the chili booth next to him. Great idea actually as I really do remember him. The chili? Not so much. It was one cup in a mass of tons of other cups all tasting of heat and chili and spice and bleh. Because this booth was at the back of the show. Chili had totally lost it’s appeal by then. 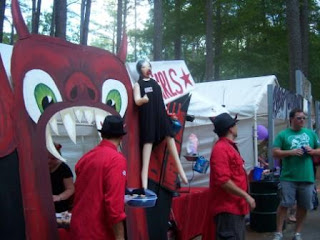 This booth had it’s own idea of marketing. We did not try their chili. We were afraid… 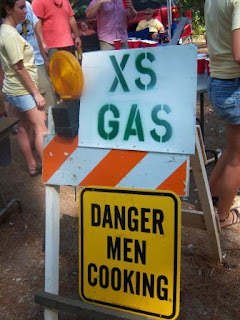 And this is the booth that got my vote. Solely due to marketing their chili with an honest campaign. I know this because I had to ride behind my husband the whole way home. Take my word for it…

So that was our adventure for the weekend. We are still sitting around all bloaty and burpy, and we have had our share of chili to last us for then next six months. After I get over the chili hangover, I plan to work a bit on watching what I eat this week. And with the change of weather, maybe actually get some good walking/running in. After I quit burping, anyway….

Next post: Seagull Our Featured Guest Star- All Things Paper