We took the motorcycle out again this past weekend and checked out an antique and craft show up in Alpharetta.  The show was nice and I got lots of great ideas.  Unfortunately, we had to sit in every single red light getting there and a 45 mile trip actually took us over two hours.  Motorcycles are lots of fun- as long as they are moving.  I have to tell you that my butt was very glad that trip was over.  Next weekend, we plan to hit some country roads with less red lights.  Hopefully, my butt will have recovered by then.

We were sitting at one of the many, many lights when a car pulled up beside us.  The passenger rolled his window down and waved at us.  We nodded politely, because, well we are polite.  Then he asked, “So are you enjoying Atlanta?”  Ummm….yeah.  Then the light changed and we all moved on.  My husband says, “What the heck was that about?”  And it occurred to me that the back of my shirt said Jackson Hole, WY.  I’m guessing he thought we were from out west.  That would have been a heck of a ride.  My butt hurts just thinking about it. 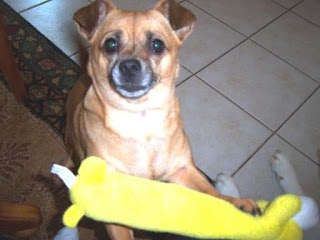 Our other major adventure this past weekend was to make an attempt at enforcing some dental hygiene on our Chihauhau-Pug, Faith. You see Faith is known for a few things. One is her Chihauhau-like attitude. She’s not a fan of most folks. In fact, she can count on one paw how many people she really likes. If she deems you “unsuitable” as buddy material, you will most likely receive a good look at the curled lip that makes her look amazingly like Elvis. Well, a small hairy Elvis with floppy ears, but you get the picture. My family refers to her as “Devil Dog”. To us, though, she is very sweet- most of the time.

The other thing Faith is known for? She has the breath of the dead. Ever smell a dead zombie after he has trecked through a field of dog poop in sweaty sandals with toe fungus? I’m thinking her breath is worse than that. Not kidding. And being that I am one of those folks that she has deemed eligible to be her buddy, I end up on the receiving end of that stench more times than I want to count.

The vet looked at her and said her teeth were healthy. She just had hair caught between her front teeth from chewing on herself. The vet helpfully suggested that we try a waterpick or maybe some dental floss. Well, after enduring the breath of the dead, I’m willing to try anything. So we chose some toothpaste and a small toothbrush from the vet’s selection of doggy needs. I could choose between chicken flavored or beef flavored. Wow. Now who would have thought we’d have a selection? I’m thinking that knowing my dogs like I do, probably poop flavored would have been the best choice. But we settled for chicken.

I optimistically grabbed some dental floss, toothbrush and toothpaste and then cornered the unsuspecting dog. CHICKEN!! She loves chicken! Ummm… not apparently when it is in the form of toothpaste. I got in two good swipes before her brain turned on and she realized what I was up to. Elvis lip appeared. So I called in reinforcements. My husband was more than happy to lend a hand. He held the now growling and squirming dog while I did my best to pry her doggy lips apart.

Ever watch the Tasmanian Devil cartoons when you were a kid? It was kind of something like that. Suddenly we were in a swirl of growling, snarling doggy parts. The Devil Dog in action. Thinking about it later, I’m pretty sure her head spun around and I heard a deep voice utter “GET OUT!!!” Or maybe that was just my imagination…I think.

End result- both my arms scratched and bleeding, chicken flavored toothpaste on the cupboards, in the sink, all over the floor, and in my face, a broken expensive doggy toothbrush and one pissed off, mussed up dog with nasty breath. And then there was my husband who was unfortunately wearing shorts at the time. Let’s just say his injuries were a bit worse than mine…

We both turned in our doggy dentist hats. Faith now has an appointment at the vet for a teeth cleaning.