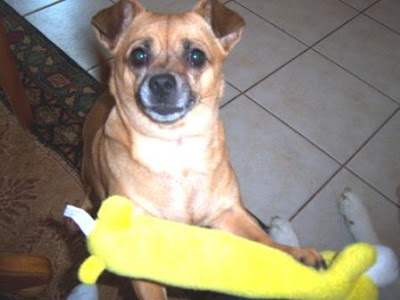 I took my chihuahua/pug, Faith, to the vet last weekend for her yearly checkup and shots. As usual, getting her in the car was easy, but getting her out was a struggle. The last time she went to the vet, she was there to be spayed. I think she might have remembered the place. I’m sure in her mind, this was the place of torture.  What would she lose next?  A leg?

When I opened the door to get her out, I had to pull her out. Dogs don’t have fingers, but somehow she was clutching the seat. I put her on the ground and she immediately put her breaks on. You see, her head is chihuahua and her body is pug. She has a little bitty head stuck on a pug body. That means when she puts on her breaks, her collar will slip off her stocky neck and right over her little bitty head. After much argument and a bit of struggle, I got her into the vet’s office where she cowered in my lap. If she could had gotten any closer to me, she would have been behind me.

She was sweet to the nurses and growly at the vet, as usual. He’s used to it and is wonderfully good natured about it. Unfortunately, the hairy thing weighed in at a whopping 20 pounds! To put this in perspective, when she was there last- six months ago, she weighed 15 pounds. That is the equivalent of gaining 1/4 your body weight in 6 months or if I was going to compare it to me- over 50 pounds in six months time. I knew she was getting chubby, but I just felt it was more to love. The vet explained that it was not unusual for a female dog to gain weight after a hysterectomy. “Tell me about it”, I said. Apparently the same goes for people as I can attest to it myself.

He asks what I feed her and I tell him a 1/2 cup of dry a day and milkbone treats. (I neglected to mention the pack of bologna that I buy for the dogs each week as a good-bye treat before I go anywhere). What?  So, I’m ridiculous.  I know that already…

He suggested I feed her baby carrots instead of her milkbone treats.

Yes, he says most dogs love them. …Oookay.

So I buy a big bag of baby carrots and when I get home I make a big deal about what a great treat I have for them. All three dogs are beyond delirious, their tails wagging so hard that their butts are wagging too. They can’t wait. I drop a baby carrot in each of their mouths. The shepherd’s eyes get big and before the carrot gets much past her lips (I think dogs have lips, don’t they?), she spits it out with disgust. It rolls across the floor and Faith snags it and runs under the dining room table with both carrots in her mouth. Both Ralph and Sandy give me an insulted look and pad back out into the livingroom.

Two days later, my husband grosses out as he steps on both wilted carrots in his bare feet.

So much for baby carrots. So now Faith is on a diet. I substituted sliced chicken for the contraband pack of bologna I buy them each week and I located lower calorie dog food. I told her not to fret, she is not alone. We will do this together. We can weigh in together in the mornings. I can teach her the tricks of the trade, how she needs to remove her collar, clip her nails and maybe get a good brushing before each weigh-in. Little things add up, you know.

Now I have to get her exercising. Maybe she can do yoga with me. She would probably be great at the Downward Dog. 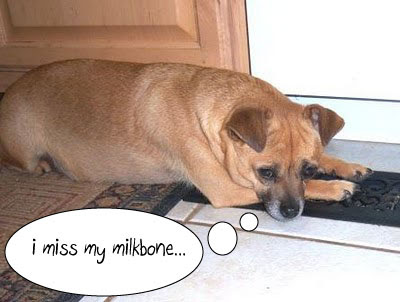 Next post: Our Featured Guest Star- Moms by Heart