Can you do the Heimlich on a fish?

I think I’m a fish killer. My husband’s goldfish has passed away. No warning, no signs of impending death, no sad fishy looks my way. One day he was there munching happily and the next day he was floating. I’m thinking he must have had a little fishy heart attack or something. Goldfish are kind of like that. They really aren’t talkers. There seems to never be a warning.

It just makes me mad that it is always his goldfish. We have a 55 gallon tank that sits in the dining room so that we can watch the fish while we eat dinner. I used to fill it with all tropical fish, but I have this love for the colorful ones and it seems that most of the colorful ones are mean, angry, therapy-needing fish. Many, many times I’d buy a group of fish and end up with one mean, angry fat one left over.

Sometimes they would all disappear in one night and I’d find Mr. Angry swimming around burping and waiting patiently for a new batch of innocent newbies. So after many tries, I resigned myself to only collecting “Community Fish” as they have a much better personality overall and don’t spend their time trying to eat each other.

My only issue with community fish is that their colors were not as vibrant. They just didn’t seem exciting. That was when we discovered goldfish and all their colors and variety. So we began stocking the tank with fancy goldfish. My husband and I went to the store and picked out several a piece. After all, you can put quite a few fish in a 55 gallon tank.

Invariably, his always die shortly afterward. No warning. Just dead. Mine always survive. I have some in the tank that we’ve had for years now.

Now, I don’t think it is me, although my husband gives me the eye every single time. One of his fish jumped out of the tank and was discovered several days later by the dog under the Christmas tree. He was covered in fuzz and dog hair and was past reviving. Another choked on a rock and died. I know this because I found him floating with a rock lodged in his mouth.

This one caused a bit of a conundrum for me as I wasn’t sure what I would have done if I had actually witnessed the choking incident. How do you do a Heimlich on a fish? Would it have occurred to me? I’m kind of glad I wasn’t there. It would have haunted me.

So, needless to say, I was a bit upset when I found his recently departed goldfish. He’s going to think I wasn’t taking care of it. I’m going to get the eye again.

So I went to the pet store to find a viable replacement. Since we only buy fancy goldfish, it would be impossible to find one exactly like it, but a nice replacement is better than nothing. I spent quite a while viewing all the tanks and finally narrowed down my choice to a pure white goldfish. It was beautiful and I thought he would appreciate the care with which I chose it.

As with most stores right now, this one was sorely understaffed. I located the one teenager that appeared to be handling the fish department. He was dealing with a very needy lady who apparently had never owned a tank and instead of purchasing a book about it, she was going to quiz him about her every need. It appeared that she was going to base her decisions on the advice of a youngster that just barely had his drivers license. Whatever. I noticed that there were quite a few folks waiting for his attention ahead of me. So I gave up, at least for the day. Otherwise I’d still be standing there. 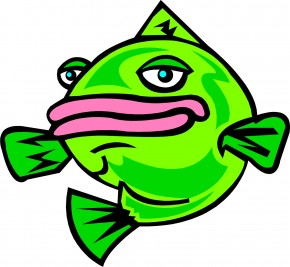 Hopefully, I’ll have a new fish for him soon. I’ll do my best to keep it alive. Maybe practice the Heimlich. But I have to say that I draw the line at mouth to mouth. BLEH.

For over 100 crafty tutorials for all ages, be sure to visit my Tutorial Page!

Next post: Project Life- a simple way to scrapbook!