I live in Atlanta, but I’m not originally from the south.  We moved to the Atlanta area from the north when I was 15.  I’m not going to say how many years ago that was, but suffice it to say, I sound like a born and bred southerner now.  When we moved here the culture shock was pretty significant.  Learning the dialect was daunting. 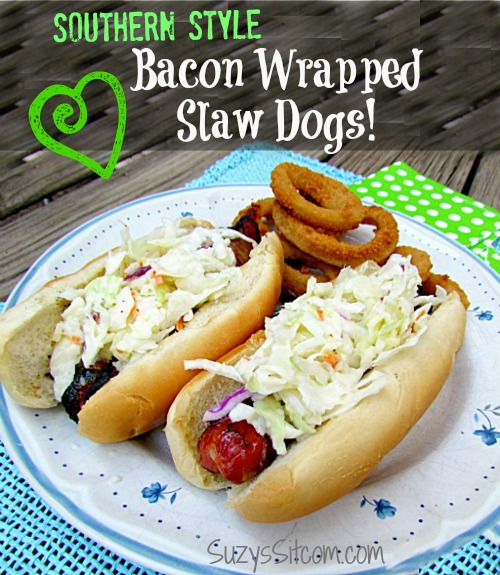 Here are just a few examples of the colorful local vocabulary:

All Y’all – You, you and you!  Every one of you!
All bowed up– Ready for a fight
Mash the button : Nobody ever pushes anything around here, it is all mashed.
Buggy: That thing you probably refer to as a shopping cart
Might Could: More than likely it can be done!
Fixin-to: About to do something, or at least thinking hard about it
Eat up- Go out in the yard at night and you get eat up by mosquitos.  Seriously.

So lets practice: “All y’all are fixin-to get eat up if’n you don’t mash that button and spray those suckers.  Don’t get all bowed up.  You just might could carry yourself down to the quickie mart and fetch a buggy and some bug spray.  Reckon?”

But vocabulary wasn’t the only thing we had to get used to.  Southern food is a whole new adventure.  Steak for breakfast, chicken and waffles, collard greens, cornbread, sweet tea, pecan pie and cobbler.  The veggies are all fried.  Which is good in a way because boiled okra is just disgusting.  Oh, and then there are grits.  Yep, not just one grit, but many.   That is one southern standby that just has never grown on me.

Recently, I tried a southern version of hotdogs.  You see, in the south, they put slaw on their hotdogs!  And you know what?  It’s actually pretty good!  I made my own version of Southern Style Slaw Dogs.  Created by a northerner who now pretty much blends.  Want to know how? 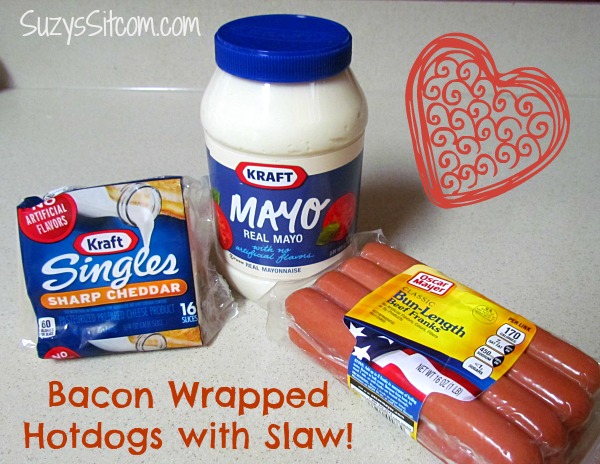 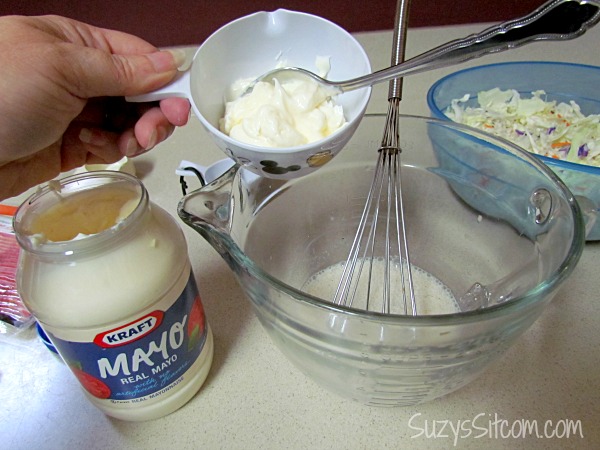 Make the coleslaw ahead of time.  It needs to sit in the fridge at least two hours.  Overnight is good too.  In a large bowl, mix together all the coleslaw ingredients except the cabbage. 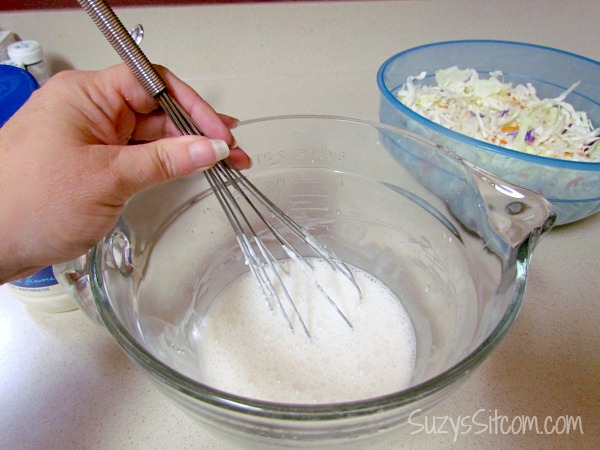 Use a whisk to mix the ingredients well. 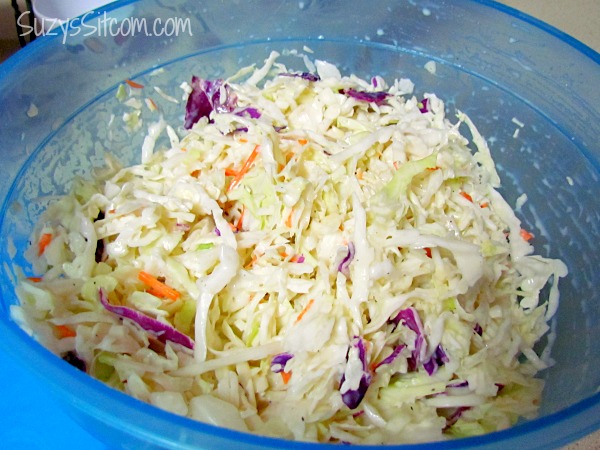 Add in the shredded cabbage and toss well, then refrigerate.  Simple right?  My favorite kind of recipes only take a few moments so that I can get back to my craft room.  Just saying. 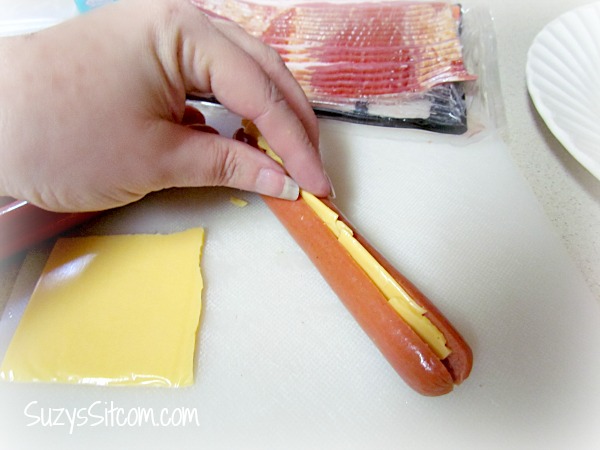 Now lets work on the hotdogs.  Slice the hotdog horizontally, not going all the way through.  Then place narrow slices of cheese in the crack.  (Another option is to place your cheese in your bun.  When you add the steaming hotdog, your cheese will get all melty and delicious). 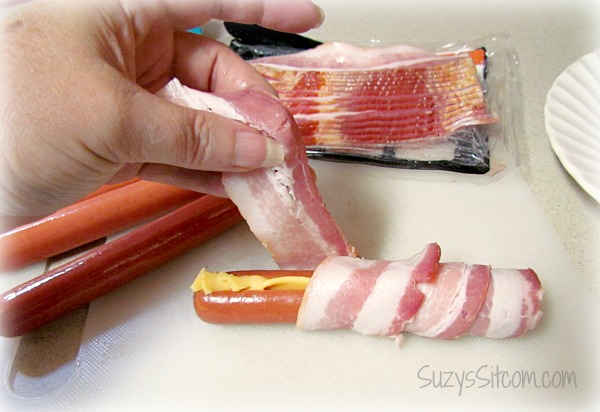 Wrap each hotdog with two slices of bacon.  Starting at one end, anchor it with a toothpick.  Wrap around the hotdog, adding the second piece of bacon at the middle and continuing it to the end.  Anchor that end also with a toothpick.

Did I mention that most anything tastes great with bacon? 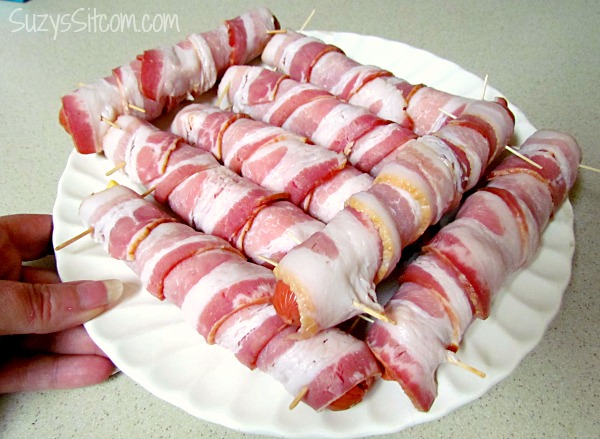 Here are the wrapped hotdogs ready for the grill! 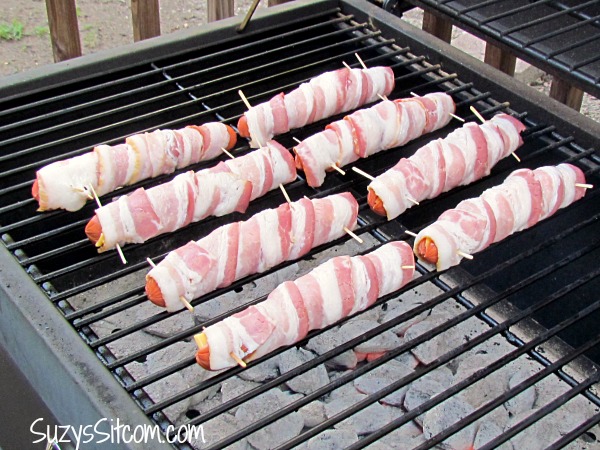 I guess you could cook these in the oven, but since we are traveling a lot, we love to find new recipes for the grill.  This one fits the bill. 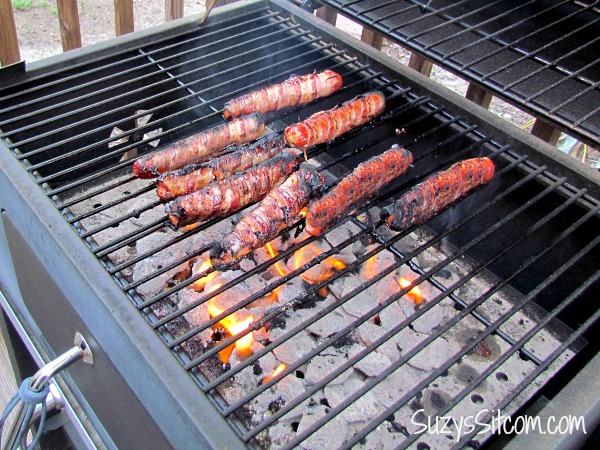 Because this is bacon over a hot flame, it is a good idea to lower the coals a bit to give the hotdogs some breathing space.  And then be sure to supervise, turning the hotdogs frequently with a pair of tongs.  We found that it takes about 15 minutes to cook the bacon all the way.  The hotdog inside will be ready at the same time. 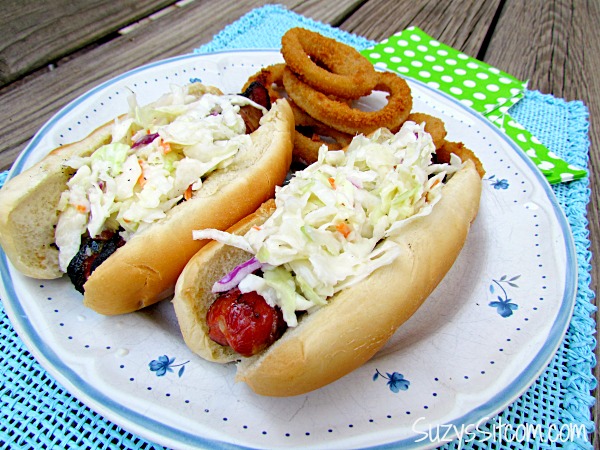 Now add your slaw to the top of the hotdogs.  Some folks add mustard at this point, but I like it just the way it is.  You will be surprised at how well the sweet slaw goes with the saltiness of the bacon wrapped hotdog.

This is one southern dish that I definitely stand behind!

Grits?  Well not so much.  But maybe one day it might-could grow on me.  Reckon?

What is your favorite southern dish?

Previous post: Salt Dough Bear Magnets for Back to School! 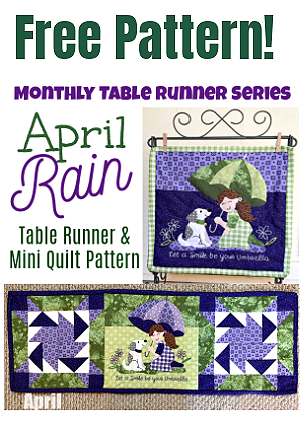